The Sins (plural) of The Young Avengers, Deathlok, and Lockjaw (wait, what?) are laid bare in the first issue of the new five-part series. 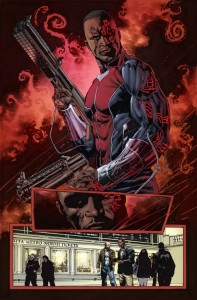 This June – the sins of the Marvel Universe extend much further than you can possibly imagine. Today, Marvel is proud to present your first look at ORIGINAL SINS #1 – the first in a 5-issue companion series exposing even more secrets than could be contained in Original Sin! Each issue of ORIGINAL SINS contains three all-new stories spotlighting fan-favorite characters throughout the Marvel Universe.

“Like the ultimate NSA leak, the Watcher – regardless of whether you’re a hero, villain, innocent bystander – the Watcher has seen everything you’ve done,” says Executive Editor Tom Brevoort. “He’s seen it and he knows all, and there’s so much that affect so many players in the Marvel Universe that apart from the spine of the murder mystery proper [in Original Sin] and the impact on the characters that have their own titles, there was still grist to deal with characters of all sorts throughout the Marvel Universe.”

Who is Deathlok? Rising star writer Nathan Edmondson (Black Widow, The Punisher) and fan-favorite artist Mike Perkins expose the secrets of the cyborg super-soldier! But all is not as it seems. And a hidden truth will finally be revealed, setting the stage for Deathlok’s return to the forefront of the Marvel Universe.

Then, Eisner-award winning writer Ryan North (Dinosaur Comics, Adventure Time) and artist Ramon Villalobos (What If: Age of Ultron) follow the Young Avengers in the first of a 5-part serial running through each issue of ORIGINAL SINS. As Hulkling, Marvel Boy and Prodigy attempt to track down the super-powered crime-lord The Hood, even they’re not prepared for what they find. And for one Young Avenger, the death of the Watcher will become a very personal affair.

The Watcher saw all, and no fan can afford to miss exciting new stories featuring the most requested characters in the Marvel Universe when  ORIGINAL SINS #1 hits comic shops and digital devices this June!

Wow has it been a while since Deathlok has been seen on the main stage in a Marvel comic. I’m sure his use in the Agents of S.H.I.E.L.D. TV show had something to do with this resurgence, but I really don’t care too much where it came from since I dig the character.

As for the other parts of Original Sins #1, Young Avengers seems to have a pretty solid story lined up with some good characters too in Hulkling, Marvel Boy, and  Prodigy. I have no idea who the Hood is, but I’m sure it’ll be plenty interesting for fans of those youthful crime-fighters. And Lockjaw? Well, I’m thinking this is a little comedy bit just to liven things up in the otherwise pretty grim ‘Who killed the Watcher’ crossover event. Maybe he’s been hiding a big Galactus-sized chew toy or something up on the moon. What? Could be.

Jason's been knee deep in videogames since he was but a lad. Cutting his teeth on the pixely glory that was the Atari 2600, he's been hack'n'slashing and shoot'em'uping ever since. Mainly an FPS and action guy, Jason enjoys the occasional well crafted title from every genre.
@jason_tas
Previous Need for Speed racing onto Blu Ray soon
Next Gran Turismo 6 gets a new BMW with the BMW Vision Gran Turismo