In what is likely the last Nintendo Direct before the big one on E3, Nintendo decides to devote it entirely to one of their biggest upcoming Wii U games yet, Mario Kart 8. 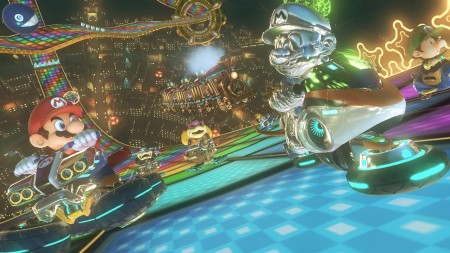 This direct is a little different than the usual one you’d see. Although we still see Iwata to a certain degree, he takes a more hands-off approach, allowing the developers, producers and others from Nintendo explain in depth various features in Mario Kart 8. They start off hot and deliver an explanation on how anti-gravity works; much like F-Zero, the courses will appear ride-side up, even though you’re really upside down. When you cross the blue anti-gravity strip, your kart’s wheels will immediately turn on their side, engaging in anti-gravity mode. Mario Kart 8’s producer Hideki Konno touches on how the game truly changes when you’re in anti-gravity mode.

Sometimes, you’ll want to abstain from furiously attacking your opponent while in this state, and forge a temporary alliance, siphoning off each other’s speed. This adds an interesting new element to races, providing a more strategic aspect to how you will approach them. Of course, you can just attack them and move on, but maybe you’ll want to keep bumping into each other to get that speed boost in order to catch up to a really tough opponent ahead. You can also touch these objects sprawled across the anti-gravity section that function like the arrows in F-Zero which increase your speed.

In between explanations on how the game works, and other features that will be included in the game; filler such as a history on Mario Kart is shown, starting with Super Mario Kart and eventually ending with Mario Kart Double Dash. Nintendo also explains customization, giving us a quick peak and what sort of gliders you can equip, the kind of wheels you can incorporate in your vehicle, and general design of the kart. It all functions much like Mario Kart 7‘s customization. Some new characters are revealed, such as Baby Rosalina and Pink Gold Peach. A short tutorial on items is also presented, and two new ones make an appearance as well. The first is crazy 8, which can be used just like the lucky 7 in Mario Kart 7. A ring of various items surrounds the player, and they can activate each as they pass directly in front of them.

The next item is the super horn, which was shown in previous trailers; not much was known about it, as we only had brief displays of the item. The horn is a defensive and offensive weapon; it can be used to attack people that are close to you, or it can deflect projectiles. It can even deflect the dreaded blue shell, so for those of you that aren’t quite fond of that item, take solace in the fact that it’s not a completely unavoidable weapon. Next, Mario Kart 8’s director Kosuke Yabuki explains the differences between the kart and bike. For those of you that were dreading another game filled to the brim with bikes, rest assured it is no longer the fastest vehicle in the game.

Yabuki demonstrates this by doing a time trial in Moo Moo Meadows and Mario Circuit. The bike was faster in Moo Moo Meadows, and the kart was faster in Mario Circuit. This is because the kart’s speed is faster than the bike’s, while the bike’s speed boosts from drifting are faster than the kart’s. As Yabuki poignantly puts it, the speed between the two vehicles depends on the course. If there are more straightaways, then the kart has the advantage, if there are more tight corners to hug, the bike has the advantage. Following Yabuki’s demonstration, Nintendo goes into detail about online features. You can create tournaments that anyone can join in, play against people in your region, worldwide, or just race against your friends. Voice chat support has also been added, but can only be used with friends.

You can also download ghost data from others online, and even upload videos of yourself racing and post them on Youtube. Following the online features is a live band that plays a variety of tunes that you’ll hear in Mario Kart 8. The music is real jazzy, much like the kind you’d hear in Super Mario 3D World. If all of that wasn’t enough for you, Reggie Fils-Aime himself makes an appearance as well. He announces that a new Mario Kart 8 bundle will be available to purchase; it comes with a Wii Wheel and Mario themed Wii remote. The 32gb Wii U will be included in this bundle, and obviously Mario Kart 8. Altogether this bundle will cost $329.99. You can also register a code on Club Nintendo that comes with the bundle, allowing for one free game to be downloaded on the eshop. The choices are The Legend of Zelda: The Wind Waker HD, Pikmin 3, NSMBU, or Wii Party U.

Last but certainly not least, a new trailer for Mario Kart 8 is shown at the end of the video. Some new courses make an appearance, such as Bowser’s Castle, Wario Stadium, and the Mario Kart 8 version of Rainbow Road. There’s probably more to come from Nintendo as far as Mario Kart 8 news, so keep your eyes peeled this month.

Well, my name's Christopher Deleanides as you all know and I'm the Nintendo Editor here at BG. I've been playing video games since 1992, and I've been a Nintendo fan the entirety of those years. My love for video games as well as Nintendo hasn't changed, and probably never will. The only thing that comes close is politics, as I'm very deeply involved in both local and international issues.
Previous Serious Sam Classics: Revolution loads up onto Steam Early Access
Next Dark Horse unleashes the Ghost Fleet, Donny Cates newest book