What’s 2 1/4D, you ask? Well, it’s kind of like 2D and kind of like isometric view, but splits the difference between the two for a play experience that developer Roll7 calls ISO-Slant. Cover shooters never looked so slant-tastic. 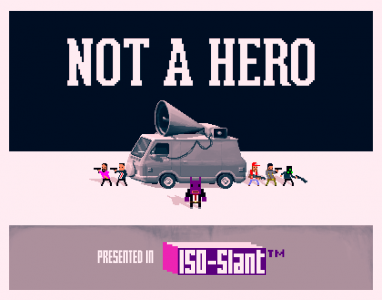 When an anthropomorphic rabbit/mayoral candidate from the future named BunnyLord needs a murderous loner to clean up the city during the election, Steve heroically offers up his dubious skills with a gun and lack of self-preservation instinct to this mysterious stranger from beyond. Now Steve must clear five districts of crime and recruit new heroes for his cause by sliding, diving, ducking, and taking cover through hundreds of full-throttle shootouts across the city. Through the power of ISO-Slant technology and a wasted youth, London-based developer Roll7 (OlliOlli) delivers the greatest 2¼D cover-based indie shooter of all time ever.

Yes, that’s a borderline crazy summation of the story behind Roll7 and Devolver Digital’s Not a Hero, but it actually looks pretty great too. NaH has a neat, retro look to it, but also packs that ISO-Slant tech under the hood that gives the game a modern edge. Sort of.

Of course, cover shooters are pretty popular too, and the developer says that this is definitely one that’ll make you time your shots well with enemies that are well versed in that time-honored tactic of ‘pop and shoot’. Have a look at the gallery of gifs below and stay tuned for lots more on Not a Hero we get closer to the Fall release date for the game, when it’ll appear on next-fen consoles and Steam for the Mac, PC, and Linux machines.

Jason's been knee deep in videogames since he was but a lad. Cutting his teeth on the pixely glory that was the Atari 2600, he's been hack'n'slashing and shoot'em'uping ever since. Mainly an FPS and action guy, Jason enjoys the occasional well crafted title from every genre.
@jason_tas
Previous Rai #1 Plus Edition announced with extra content
Next All-New Invaders #6 (Comics) Preview