Plucked from the past, this version of Cyke still thinks his father is long dead, not knowing that he’s actually the Stajammer space-pirate Corsair. Think that’s going to come as a shock? 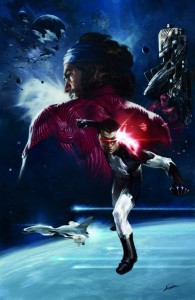 What would you do if you were suddenly thrust into the future? See your older self. Learn the path you’ve taken. The mistakes you’ve made. Now, imagine that the father you thought died long ago is alive and well – and is a space pirate! This May, experience the ongoing adventures of young Scott Summers in CYCLOPS #1 – the all-new series from Eisner Award winning writer Greg Rucka and artist Russel Dauterman!

Spinning directly out of the blockbuster All-New X-Men crossover “The Trial of Jean Grey” comes the very first ongoing solo series for one of the time-travelling Original X-Men. After clashing with the Shi’ar on the edge of deep space, Scott Summers is about to encounter the last person he’d ever expect to meet – his father!

Long thought dead, Corsair, leader of that intergalactic band of misfits the Starjammers, has returned! And he’s got a new recruit in the form of his son, young Cyclops himself! Scott Summers is leaving the X-Men behind to stay in space amd learn a few valuable lessons from dad: 1) How to shave, 2) How to talk to women, 3) How to steal a Badoon spaceship.

“This books is everything Marvel is about – high stakes, intergalactic action, adventure and intrigue with the emotional core of a father and son who have to repair their relationship,” says Editor Tom Brennan. “Corsair and Cyclops are both in a bold new world – a man back from the dead and a teen out of time. They need each other now, and the universe needs them more than ever.”

Don’t miss one moment of the high adventure in deep space as Rucka & Dauterman kick off the newest cosmic adventure this May in the action packed CYCLOPS #1!

Has Cyclops ever had a standalone comic? I can’t remember one, but it kind of seems like he should, so this is probably overdue in terms of comic-worthiness. It seems like the book will be kicking off with a bang too as we get not only an original Cyke story, but also a little Corsair and the Starjammers action too- and how long has it been since we’ve seen them in the Marvel U in any major way?

Oh, and pretty wicked too? That awesome cover art from Alexander Lozano. The All-New version of Scott Summers takes leave of his X-Men and readies his visor to blast off into the cosmos this coming May in Cyclops #1 from writer Greg Rucka and artist Russel Dauterman.

Jason's been knee deep in videogames since he was but a lad. Cutting his teeth on the pixely glory that was the Atari 2600, he's been hack'n'slashing and shoot'em'uping ever since. Mainly an FPS and action guy, Jason enjoys the occasional well crafted title from every genre.
@jason_tas
Previous Bayonetta, Monolith Soft’s X and more for February’s Nintendo Direct
Next Original Dungeon Keeper Free On GOG This Weekend