The classic fighter blasts back into action in a revival that embraces ideas both new and old. 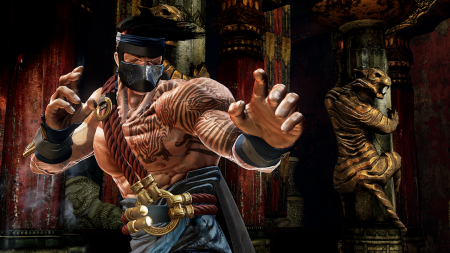 I’m not much for them anymore, but when I was in school my friends and I were all about fighting games. We loved ’em so much that we would assemble fighting game tournaments over breaks from school and Summer vacation that we’d use to mark the end of the time off. It was kind of like a ‘one last hurrah’ kind of thing and of course, these tourneys were also a source of no end of post-victory bragging.

We’d put together select games for the events and angle on seeding and character selection to try and get the absolute perfect mixture for that big win to end the break on a high note. Personally, that high note was never involving me as I kind of stunk at fighters… that’s probably why I don’t real play them much anymore now that I think about it. Even so, there were a few games in that mix that I was particularly awful at; Eternal Champions, Weaponlord and Killer Instinct chief amongst them.

Even though I was terrible at it (and couldn’t do a combo longer than three or four hits), KI was nonetheless a favorite. It’s mix of excellent control, awesome graphics (at the time) and killer characters that made no sense whatsoever but were still super-cool was just too much of a winning combination not to enjoy- even if I sucked. Rare’s KI remake on the Xbox One is much the same for me, with the exception that I’m actually not half bad at it.

The version I played for the Xbox One actually included the original game as well, so I go the chance to compare both head-to-head. The verdict? The new KI is so much better tuned than the first one it almost isn’t even the same game. Crisp, fast, violent and gorgeous, Killer Instinct on the Xbox One is a fighting game that’s a joy to play even if you’re not of the fighting game mold.

Probably the first thing you’ll notice about the game (since this is next-fen after all) is that the graphics engine is seriously beautiful. I had the chance to play KI at the SDCC this past July (against one of the developers no less) and I didn’t notice, probably because I was in the process of getting my teeth kicked in, just how pretty this new updated version is.

There’s a tremendous amount of detail in both the backgrounds and the characters themselves in KI and it borders on looking like an animated feature at times. So much so in fact that I had a non-gamer walk into the room as I was playing and ask what I was watching. It’s that good looking. Even characters who were dull and somewhat lifeless in the older game have been overhauled into vibrant, well animated and downright cool-looking selections this time around- I’m looking at you Jago.

The roster is kind of small though and that’s one of the issues I do have with KI. Rounding out at just 6 fighters with two more on the way soon, Killer Instinct is more about quality than quantity at this point. I totally get that, but it doesn’t make it feel any better that some of my favorites from the SNES release were left on the cutting room floor. I miss Fulgore and Cinder and the rest and I hope Microsoft will attend to their absences at some point soon. I like the idea of getting some new characters too, but KI fans want the classics and I’m definitely in that boat. Crossing my fingers that we at least get the full original roster in the second ‘season’.

Yes, KI’s developers went the ‘free-to-play’ route with the game. Basically that means that the base download includes just one character (the ninja Jago). It’s actually not all that bad being f2p though and the convention serves as more of a ‘demo’ version of the game than anything else. The complete Season One download is right there and accessible right through the game’s front-end for buying. It does’t even take all that long to download over broadband- not terrible at all.

Killer Instinct plays as well as it looks too. Controlling your character is easy even for a lapsed fan like me, although there’s still a beastly amount of depth and combos can be monstrously long chains of battling bliss. I had a great time chaining together moves into actual strings longer than I had never done in a KI before. I’m not sure if that’s due to the fact that I’m a better player now than I  was in my teenage years or because Rare made the combo system easier to get into and work with than before, but I like it. In no time at all I was in the game and pulling off killer combos of 15 to 20 hits. If you’re a Killer Instinct pro, then that might not seem like much to you, but was awesome for me.

And what kind of KI would we have here if there was no announcer to go along with your impossibly long combo? Fans will be happy to note that the c-c-c-combo-happy voice of KI has indeed returned and is bassier than ever. As for the rest of the audio, it’s just fine and serves as a suitably rocking backdrop to the one-on-one fighting action. I have to say too that the opening theme is really great in a 90s-tastic way.

I was excited to hear that Killer Instinct was to be revived for the Xbox One as one of the first titles to hit the console, but that was probably more having to do with being a Rare fan and wanting to see the developer make a strong showing on Microsoft’s next-fen rig than anything else. Here after launch though, I’m very happy indeed that the actual game is as good as it is.

Killer Instinct has just enough of everything that made classic KI so great for longtime fans and more than enough in the way of solid play control and excellent graphics for those who might just be discovering the game. If you’re looking for a fighting game here at the Xbox One’s launch, Killer Instinct will definitely go a long way towards slaking your battle-lust.

Jason's been knee deep in videogames since he was but a lad. Cutting his teeth on the pixely glory that was the Atari 2600, he's been hack'n'slashing and shoot'em'uping ever since. Mainly an FPS and action guy, Jason enjoys the occasional well crafted title from every genre.
@jason_tas
Previous Super Mario 3D World (Wii U) Review
Next Plants vs Zombies: Garden Warfare headed to Xbox One/360 this February