X-Force goes back to basics with Cable at the helm and a mission to take out threats to mutants the world over. 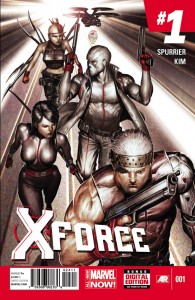 The Marvel Universe is a different place than it once was – and mutants are in more danger than ever before. Deadly threats are everywhere, and it’ll take a squad unlike any other to shut them down before they happen. S.H.I.E.L.D. has it’s Secret Avengers, Britain has MI-13 – and now Mutantkind has X-Force!

“X-Force returns to form as the black ops team that isn’t afraid to get its hands dirty protecting the species,” says Axel Alonso, Editor-in-Chief. “But this time, X-Force isn’t looking to keep its existence a secret – they want to send a loud-and-clear message to the world that the Mutant Nation is not to be messed with.”

In this game of no-holds barred, superhuman black-ops – it’s kill or be killed. And with veteran X-Man Cable at the helm – Psylocke, Fantomex, Marrow, and more are going to ensure that Mutants have a stake in the future of the Marvel Universe – by any means necessary!

If this is, in any significant way, a return to form for X-Force to the way it was in the 1990’s, then mark me down. Seriously, the tone of that book was classic and the grittier feel (to say, X-Men) was noticeable and a very cool change. Marvel looks to have put together a pretty cool team too with the likes of Cable (of course), Psylocke and Marrow (there’s a blast from the past), and the release mentions “more”, so I’m hoping a few more not-so-merry mutants from the team’s pre-millennial days might show up.

Look for X-Force (love that they went the no adjective route, by the way) #1 to drop onto the racks this coming February form the team of Si Spurrier and Rock-He Kim. Now to keep those fingers crossed for that X-Force movie…

Jason's been knee deep in videogames since he was but a lad. Cutting his teeth on the pixely glory that was the Atari 2600, he's been hack'n'slashing and shoot'em'uping ever since. Mainly an FPS and action guy, Jason enjoys the occasional well crafted title from every genre.
@jason_tas
Previous Nintendo Direct coming up tomorrow
Next Humble Bundle Launches The Humble Store