DICE and EA showed off just a taste of the new Mirror’s Edge title at E3 yesterday. Expect parkour and lots of bright colors. Update: now with 100% more trailer 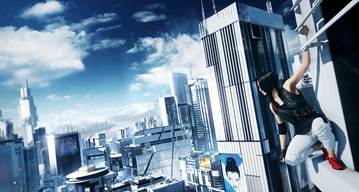 “We introduced Mirror’s Edge and Faith to gamers five years ago, and we’ve waited for the right moment to reunite them,” said Sara Jansson, Senior Producer, DICE. “Thanks to the Frostbite engine and a new generation of platforms, we are now able to deliver a richer world that players will be able to explore with a new level of freedom in both movement and action.”

The very brief trailer shown depicted main character Faith getting a new tattoo, interlaced with footage of the familiar free-running the the first game in the series was known for. Interestingly, there was an awful lot of fighting going on in the montage as well and I don’t remember the original Mirror’s Edge really having an emphasis on combat.

Might that mean the Mirror’s Edge 2 (or whatever it might be called) will have more hand to hand in it? Whatever it’ll be like, one thing’s for sure- it’s gonna be pretty packing that Frostbite engine.

Update: And here’s that trailer we were telling you about:

Jason's been knee deep in videogames since he was but a lad. Cutting his teeth on the pixely glory that was the Atari 2600, he's been hack'n'slashing and shoot'em'uping ever since. Mainly an FPS and action guy, Jason enjoys the occasional well crafted title from every genre.
@jason_tas
Previous E3: Telltale announces The Walking Dead 400 Days
Next Catalyst Comix (comics) Preview