Star Wars Pinball goes cheap for May the 4th

Zen has some big discounts available now through May the 4th on all their Star Wars Pinball titles in honor of Star Wars Day. 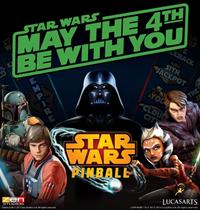 Now through May 4th (it actually started on the 30th of April), Zen is offering some very nice discounts on their Star Wars Pinball tables across a plethora of platforms.

The game, which just debuted on the Kindle Fire as well, includes a trio of tables based on The Empire Strikes Back, Boba Fett and The Clone Wars. It’s loaded with all the bells and whistles that you’d expect from a Zen title and is honestly a pretty great time even if you’re not a huge fan of Lucas’ used-universe.

If you skipped out on Star Wars Pinball when it was released, then the force really is with you as its on sale everywhere as of right now:

Our review of Star Wars Pinball is right here.

Jason's been knee deep in videogames since he was but a lad. Cutting his teeth on the pixely glory that was the Atari 2600, he's been hack'n'slashing and shoot'em'uping ever since. Mainly an FPS and action guy, Jason enjoys the occasional well crafted title from every genre.
@jason_tas
Previous It’s a fresh start for the X-Men in new ongoing title
Next Preview: Quantum & Woody #1 (now with more talking goat)