You are NOT dreaming. NiGHTS into Dreams…, one of the proclaimed “best games of all time,” is now available on your PS3 and Xbox 360. The fans are gonna love it!

Any gaming enthusiast who played console games in the 90s, and didn’t own a Sega Saturn, was likely scolded by those who did at least once in their lifetime. NiGHTS into Dreams… was often considered by many be the best Sega Saturn game ever released, while others took it a step further stating that it was one of the best games ever made.

NiGHTS into Dreams… has been released on as a downloadable game on the PlayStation 3 and Xbox 360. How does the much-beloved 16-year-old title hold up today?

This little gem was released back in 1996 by the folks at Sonic Team, developers of the popular (and sometimes somewhat obscure) Sega titles like Sonic the Hedgehog, Sonic Adventure 1 & 2, ChuChu Rocket!, Phantasy Star Online, and Samba de Amigo, and there is much to say about it. 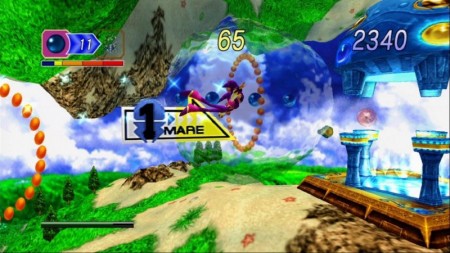 I was one of those gaming enthusiasts who missed out on the Sega Saturn, and all of its great games. While never having played it, I did witness the game’s popularity firsthand through my summer job at Blockbuster Video throughout the mid-to-late 90s. The Sega Saturn section was significantly smaller than that of the Super Nintendo, Nintendo 64, and PlayStation sections, but I clearly recall NiGHTS into Dreams… being the most requested rental for the system.

It’s not hard to notice the similarities between NiGHTS and Sonic the Hedgehog. As mentioned, both titles shared the same developer. The visuals are strikingly similar, consisting of very pretty and colorful backgrounds, where you collecting golden rings just like in Sonic. Instead of running along a path on the ground, you’ll be flying around in a somewhat open, but still linear path, collecting coins and smashing enemies. The environments are three-dimensional, and you can see rings and paths in the background, but these are not accessible. I constantly had the urge to push up and try to get the objects in the background.

I can certainly see the appeal and charm of NiGHTS back in 1996, but as a gamer in 2012, I don’t think it holds up quite as well as its legacy claims. The controls feel a bit stiff, which I actually think this was a problem with the stiffness of the animation. Having games with really smooth transitional animation, like those in the God of War series, is one of the spoils of being modern games and playing a nearly 2-decade-old game.

Anybody who has read my reviews of classic games, probably knows that I am a huge proponent of moving forward and not looking back when it comes to old games. It’s fine to reminisce — as I often do with games from the 90s — but going back and playing them is never as enjoyable as it was to play them at their prime. NiGHTS is a product of its time, and it is hard to play a classic game and not compare it to modern games.

Just because I think classic games don’t hold up well doesn’t mean that NiGHTS into Dreams… isn’t worth your time or money.

I’ve given NiGHTS into Dreams… an 8 out of 10, which I think it a pretty good score.
One of the coolest things about this release, is that you can play it with the updated “HD” look, which consists of a higher-resolution image and smoother textures, or you can play the game as it looked on the Sega Saturn.

NiGHTS also includes the Christmas-themed Christmas NiGHTS release. Christmas NiGHTS was a short, standalone disc, included in Christmas Sega Saturn bundles in Japan. In other parts of the world, it was given away with the purchase of games like Sega’s Daytona USA Championship Circuit Edition or included with issues of game magazines like the Sega Saturn Magazine.

Christmas NiGHTS unlocks once you’ve completed each level with a C-rating or above.

I can’t imagine that NiGHTS into Dreams… will generate a lot of interest with the modern gamer, or sell particularly well, as NiGHTS is a pretty obscure title. The Wii-exclusive NiGHTS: Journey of Dreams, released 4 years ago didn’t exactly impress the gaming media, either. That title currently sits at a Metacritic score of 69 (of 100).

That being said, NiGHTS into Dreams… isn’t really for the modern gamer. No, this release of NiGHTS is a love letter from Sega straight to its most loyal fans. The fact that Sega chose to release this game from vast library of games, and take the time to give it a cleaner look for high-definition televisions, and include an original Saturn-emulated version, is an extremely cool, heartfelt gesture from a huge game publisher. I believe this will go go a long way with the fans, and for those who want to see what hype is all about.

Playing NiGHTS into Dreams… typically involved hunting down a Sega Saturn system and a copy of the game, but for only $10 you can download and play a faithfully recreated port, complete with original and HD versions, and the rare Christmas NiGHTS.

Very cool move, Sega! I hope other companies see this and follow suit by releasing other beloved gaming classics.

NiGHTS into Dreams… is one of those Sega Saturn titles that gamers from the 90s claimed was one of the greatest games of all time. As I often feel about classic games, NiGHTS isn’t quite as appealing as it was 16 years ago, and it may be obscure enough to be overlooked by most modern gamers. However, for true Sega enthusiasts and NiGHTS fans, is a HUGE love letter from Sega to them.

For $10 you get an updated HD release with a better resolution and smoother, cleaner textures, an original Sega Saturn-emulated version, as well as an unlockable version of the stand-alone special release of Christmas NiGHTS. That is a very cool deal!

Troy is the Features Editor at Brutal Gamer. When he's not writing about or playing video games, he's enjoying life with his wife and children. He also loves coffee. And lots of it.
Previous Spy Hunter returns for handhelds today
Next X-Men fans, get your checkbooks ready

2020 had great games, which means we had to pit them against each other to …