Here we go again as ‘hackers’ uncover possible hidden files on the Resident Evil game disc. But is there an explanation? 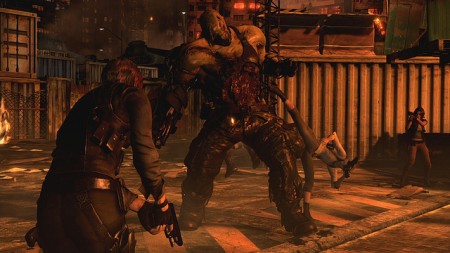 News broke recently that Capcom, already in hot water over the Street Fighter x Tekken DLC debacle, had done it again and included ‘on disc’ extra content. That content would then have to be ‘purchased’ by players in order to unlock it. Despite some early reports from folks mucking around with the disc’s code though, that doesn’t seem to completely be accurate.

MCV spoke to Capcom about the perceived issue today and a spokesman had this to say:

“We still have unannounced DLC for RE6 that will be revealed in the coming months… While virtually all such content will not be on the disc there will be one piece of content, that for technical reasons, requires the use of a combination of newly downloaded data and data that is included on the retail game disc.”

It would have been odd if they’d gone back to the practice as Capcom had released a statement to the gaming website earlier this year saying that they have indeed heard the complaints from fans and would be discontinuing the controversial practice of including dlc on the disc. There was a slight caveat though as Capcom also stated some games would not be able to be changed before launch. The company added that the titles in question were already too deep in the production process to have their DLC schemes altered.

So to make a long story short, there is some content on the Resident Evil 6 disc- but it’s supplemental stuff that isn’t ‘complete’ in any way and works in supplement to actual, honest to goodness, downloadable content.

And the lesson to be learned from all this? Don’t print stuff on the disc that, that for all intents and purposes, should be included with your original purchase. It’s just… no.

Jason's been knee deep in videogames since he was but a lad. Cutting his teeth on the pixely glory that was the Atari 2600, he's been hack'n'slashing and shoot'em'uping ever since. Mainly an FPS and action guy, Jason enjoys the occasional well crafted title from every genre.
@jason_tas
Previous Minimate NYCC exclusives announced
Next The Walking Dead to march on retail shops