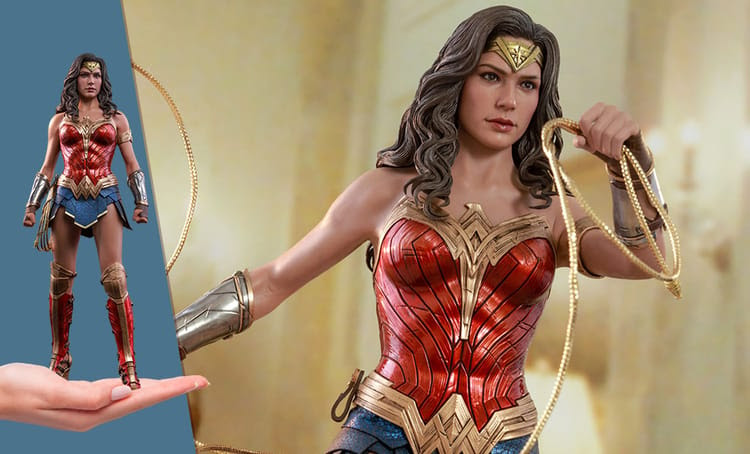 Home / Action Figures and Toys / Check out the unboxing of Hot Toys’ Wonder Woman ’84, as the figure gets set to ship

Check out the unboxing of Hot Toys’ Wonder Woman ’84, as the figure gets set to ship

You might not have dug the movie of the same name, but Wonder Woman’s latest Hot Toys figure (based on that flick) is looking fantastic.

Wonder Woman has had a kind of up and down history as of late, as goes film. Then again, that’s better than her previous history, which was nothing. It was the so-called “Snyderverse”, love it or hate it, that finally brought the Amazing Amazon to the silver screen, with actress Gal Gadot in the heels.

Of course, that’s a film-history that likely has its lid closed at this point, with Warner Bros Discovery’s complete reboot on the horizon. But while that may be so, she was no less cool to see. And it’s her potentially final appearance that toy-maker Hot Toys has keyed in on for it’s latest figure.

Inspired by the hit film Wonder Woman 1984, the Wonder Woman 1/6 Scale Figure by Hot Toys features a new hand-painted headsculpt with a detailed likeness of Gal Gadot as Wonder Woman. The figure has over 17 points of articulation, including enhanced flexibility at the shoulders, and is dressed in a glossy blue and red battle suit with red and gold battle-damaged boots. She also wears her iconic tiara and the Bracelets of Submission. Wonder Woman is ready to dispense justice with her Lasso of Truth, and also comes with magnetic sparkling effects which can be attached to her Bracelets of Submission.

The exclusive Special Edition comes with an additional lasso in motion effect, to add a dynamic look to your display.

Wonder Woman ’84 is scheduled to ship some time between March and May (2023) and both versions are priced in at $255 USD. Just in case you missed it, the Special Edition comes complete with an added lasso effect-piece.

Jason's been knee deep in videogames since he was but a lad. Cutting his teeth on the pixely glory that was the Atari 2600, he's been hack'n'slashing and shoot'em'uping ever since. Mainly an FPS and action guy, Jason enjoys the occasional well crafted title from every genre.
@jason_tas
Previous Trailer: An ancient evil awakens in Warner Bros’ Batman: The Doom That Came to Gotham
Next Trailer: Get the party started with Dungeons & Dragons: Honor Among Thieves