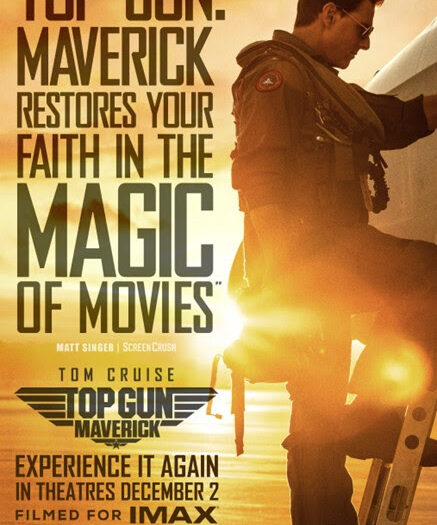 The blockbuster film that brought fans back to movie theaters in droves they year is back, as Top Gun: Maverick is returning to IMAX theaters.

After more than thirty years of service as one of the Navy’s top aviators, Pete “Maverick” Mitchell (Tom Cruise) is where he belongs, pushing the envelope as a courageous test pilot and dodging the advancement in rank that would ground him. When he finds himself training a detachment of Top Gun graduates for a specialized mission the likes of which no living pilot has ever seen, Maverick encounters Lt. Bradley Bradshaw (Miles Teller), call sign: “Rooster,” the son of Maverick’s late friend and Radar Intercept Officer Lt. Nick Bradshaw, aka “Goose.”

Facing an uncertain future and confronting the ghosts of his past, Maverick is drawn into a confrontation with his own deepest fears, culminating in a mission that demands the ultimate sacrifice from those who will be chosen to fly it.

For those who don’t know, part of Top Gun: Maverick will filmed with IMAX exclusive Expanded Aspect Ratio (EAR). The special method means that over an hour of footage is IMAX-specific, with a 1.90:1 aspect ratio. And that means that the scenes in question will have up to 26% “more picture”.

How’d they do that? Via a set of ” 6 IMAX-certified cameras strapped into real F-18 cockpits”. Yeah, that’s gonna look crazy on those insanely big IMAX screens. Not that you’ll have long to catch it.

Top Gun: Maverick is heading back to IMAX theaters only, landing on December 2nd, 2022. But when it does arrive, it’ll only be for a two week engagement. So make your plans.

Jason's been knee deep in videogames since he was but a lad. Cutting his teeth on the pixely glory that was the Atari 2600, he's been hack'n'slashing and shoot'em'uping ever since. Mainly an FPS and action guy, Jason enjoys the occasional well crafted title from every genre.
@jason_tas
Previous Fresh from Black Adam, McFarlane’s got Shazam: Fury of the Gods figures on the way
Next Trailer: Blasting out of Early Access in December, RTS Crossfire Legion is almost here