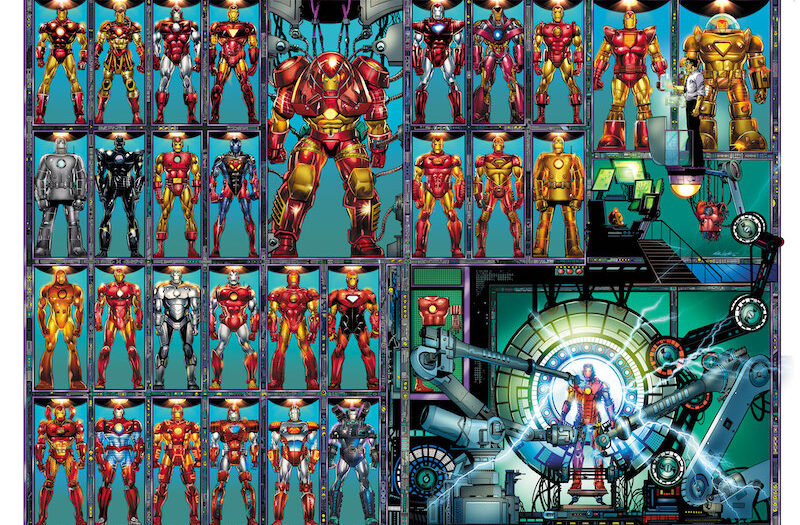 There are both big changes and a heck of a lot of covers in store for Marvel’s armored Avenger in December’s Invincible Iron Man #1.

I’ll refrain from making any jokes about Marvel relaunching one of its premier books yet again. But whatever you might think of that, there are some major changes coming for Iron Man. At least, that’s according to Marvel Comics.

The publisher says that Invincible Iron Man, from Gerry Duggan and with art from Juan Frigeri and Bryan Valenza, will see the shell-head fall in battle to a new foe. In order to bounce back, Tony Stark will have to forge new alliances and explore tactics he’s never engaged before in order to strike back.

Just in time for the character’s 60th anniversary, writer Gerry Duggan and artist Juan Frigeri will launch a brand-new ongoing Iron Man comic series in December! INVINICIBLE IRON MAN will put the armored Avenger’s high-flying abilities, genius intellect, and business savvy to the ultimate test when he experiences a devastating defeat at the hands of a villain that’s been making big waves throughout the Marvel Universe. While his identity is being kept under wraps for now, readers can be assured that Tony Stark has met his match! Tony will need to think fast and make some surprising moves in the months ahead to get back on his feet, including new bonds with surprising allies that will redefine the way Iron Man operates as a hero.

Along with the new stories and direction, Invincible Iron Man will kick off with a bang thanks to a slate of variant covers. Those will include a series of poster-style images, as well as a very cool interconnected image showing off the many armors of Iron Man.

In all, the collection will include:

All of the above will be on the racks this December the 14th, when Invincible Iron Man #1 arrives.

Jason's been knee deep in videogames since he was but a lad. Cutting his teeth on the pixely glory that was the Atari 2600, he's been hack'n'slashing and shoot'em'uping ever since. Mainly an FPS and action guy, Jason enjoys the occasional well crafted title from every genre.
@jason_tas
Previous Somebody let the air out of Xbox’ Games with Gold again for November
Next Trailer: Earth isn’t forever, but mankind endures in Plan B: Terraform