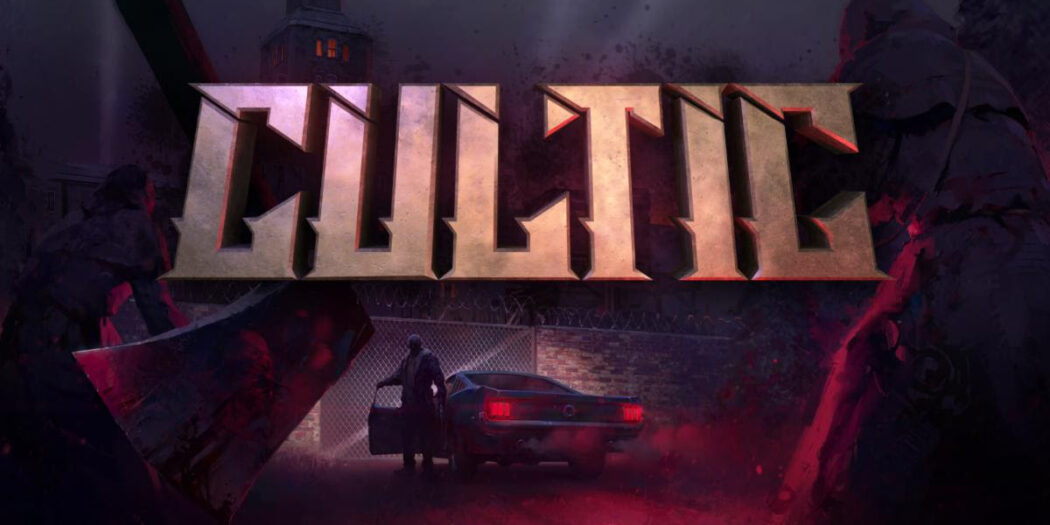 Like a playable 70s grindhouse flick, Modus and Jasozz Games’ Cultic revels in it’s retro themes, and is a blood-gushing, head-popping good time.

One of the first things I noticed about Cultic, back when I played the demo earlier this year, was that it wasn’t shy whatsoever about being ‘retro’. The game immediately pulled my mind back to games like Blood and (the original) Rise of the Triad. And I mean that in a very good way.

Cultic is more or less designed to look like it came out in the mid-90s, and goes all out with that theme. It doesn’t feel like it’d be out of place running on an old school PC in the least. Well, maybe like 90% of it anyway. Though Cultic is thoroughly retro, that’s not to say that it adheres to the conventions of 90s FPS’ completely.

Developer Jasozz Games has worked in some modern mechanics as well, to keep things a little more interesting. So it’s not all shooting and finding keys. And on top of that, the game has some nifty graphical effects that may or may not have worked back then.

I think it’s pretty safe to say though, that if you have fond memories of playing shooters in 1997, you just might love what Cultic has to offer.

A cult most foul

For a retro title, Cultic has a pretty deep story. Of course, that story isn’t told through modern means. Instead, you’ll have precious little to go on when you start the game’s campaign, and pick up fragments as you go.

That’ll come by way of notes left behind by several different kinds of people. Those include former residents, a PI who was in over his head, and those working in the cult of The Will itself. Oh yeah, that’s what the title cult is called. I think.

The story starts out without a cinematic, but you play as a detective (no name is given) who’s been on the trail of some disappearances. Following a lead, you pull your car up at an office building out in the sticks, and are immediately attacked. Thinking you dead, the assailants dump your body in a shallow grave with a bunch of other poor souls.

Once back on your feet, your character will move from locale to locale on a bloody hunt for vengeance. Those consist of the above, a camp ground, a trapped container ship, a mine, an asylum, and more. Some of these might sound out of place, but each has its purpose in the overall story. And maybe more importantly, all of them have been both well-designed and thought-out.

Also, while reading notes might not sound like the most fun way of propelling a narrative, it just flat out works here. The story pieces that you’ll find along the way tell a frightening tale of an insidious group, who prey on regular people. Some turn to their cause, while many others have a much, much worse fate. The story marries a few different horror strains, and eventually focuses on something called ‘the imbuement’. Yeah, it’s creepy, and I don’t want to spoil too much of it.

I will say that while Cultic mainly throws human enemies at you, there are some truly terrible things laying in out in the dark as well.

Primarily, Cultic is an old school shooter, with lots of bad-guy-blasting and key-finding. Yep, you’ll need to find keys in order to progress through Cultic’s levels. But don’t worry, it might be an old trope, but it actually comes across well here. That’s once again thanks to the great design choices made pretty much across the board.

Developer Jasozz Games did a terrific job making stuff ‘make sense’ in general when it comes to Cultic’s world. It’s clear that a lot of thought went into making older genre conventions feel better than they usually do.

The arsenal that you’ll use to dispatch your foes is included in that. The armory isn’t cutting edge, but each gun has modern flourishes, like alt-fires and weapon upgrades. Those can be had by finding workbenches dotted throughout the game. If you have weapon parts (which you also have to locate), you can boost your guns in a few different ways. These include making them hold more ammo and have additional stopping power.

While the guns are cool, there aren’t a ton of other items in the game. You’ll get dynamite, which is pretty common, as well as excellently effective Molotov cocktails, but that’s about it. Well, other than health kits that is.

While your wounds will heal up to 25%, that’s as high as regeneration will go. So you’ll need to find health boosts (and armor) if you want to survive. Fortunately you can also find a field kit fairly early on, which will store health packs for road, up to an additional 100%. I found the mix to be a nice compromise between offering a heady challenge and keeping things fun.

The look of an icon

You could take almost any part of Cultic, run it on a CRT, and I think a good number of players would think it really was a game from decades ago. The attention to detail that Jasozz Games has put into the aesthetic is that good. You’ll note I said “almost” though, because there are a few visual tricks here that almost surely wouldn’t have been possible in the 90s. But still, the retro-effect is excellent, and if you love classics like Blood, oh boy are you gonna dig Cultic.

The game has a gritty and grimy feel to it, with a muted color palette that includes mainly browns, greens, and other generally dark colors. That might sound muddy and dull, and I totally get that. But Cultic looks great in motion, and gives the game’s intentionally-primitive digital world the feel of a real place.

As I mentioned before too, the arsenal looks fantastic, even though it’s made up of weaponry that you’ve seen before. Everything from the pistol to the flamethrower looks freaking awesome, and most have really slick animations.

And then there are the enemies. Most of the those, far and away, are cultists. That might make sense, but most of the cultists look nearly identical. Some of the robes are differently-colored to denote the hardware they carry, but that’s about it.

I could easily see whereas some players might get bored with that. For me, these creeps were loads of fun to repeatedly head-shot, and they also provided a fantastic contrast against some of the other… bad guys. Let’s just say there are enemies deeper in the game that are decidedly not cultists.

And if you read the notes and reports that you find scattered across the game’s campaign, they make sickening sense. Cultic pulls together themes from Blood, Resident Evil, Evil Dead, and more horror classics.

I know it’s hard to tell, but I really liked Cultic a ton. It’s a simple game for sure, and no modern epic, but it does literally everything right from my point of view. Maybe the only really big downer is that it’s very open-ended. Remember, this is Cultic: Chapter One.

But if you’re looking to step back in time a bit, and play a shooter that revels in the arguably best and most inventive days of the genre, I’m pretty sure you’ll like it too.

Cultic is a retro title that does everything spot-on. It's well designed, looks as though it belongs in the 90s (that's a good thing), and plays incredibly. While it's a classically-designed FPS for sure, it also offers some modern niceties like weapon upgrades. If you miss the heyday of the genre, definitely give this one a look.

Jason's been knee deep in videogames since he was but a lad. Cutting his teeth on the pixely glory that was the Atari 2600, he's been hack'n'slashing and shoot'em'uping ever since. Mainly an FPS and action guy, Jason enjoys the occasional well crafted title from every genre.
@jason_tas
Previous Trailer: Ork fans, your time has arrived. WH40K: Shootas, Blood & Teef is out now
Next Trailer: Dwarf’s Adventure gets a new look and a December release date