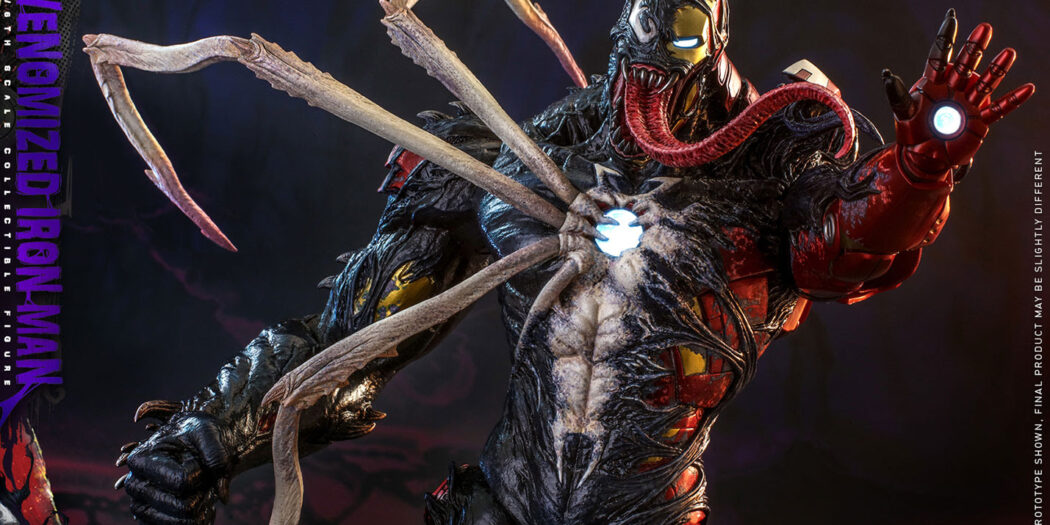 One of Marvel’s biggest guns gets a symbiote all his own with Hot Toys’ new Venomized Iron Man. Check out Sideshow’s unboxing.

Is there any superhero in the Marvel U that hasn’t been “Venomized”? At this point it seems like pretty much everyone has at one time or another. Take Iron Man, for example.

Marvel’s Armored Avenger certainly isn’t known for alien ooze, but he’s been joined with one of Venom’s kind in the Spider-Man animated series, Maximum Venom.

That’s the inspiration for this new figure from Hot Toys, which seems to put a bit of an “MCU” bent on the character’s preexisting design. That’s thanks to Hong Kong-based artist Mr. Khoo Fuk-lung, who created this look, and sculptor Mr. Joseph Tsang who brought it to life.

Have a look, in the fresh unboxing video from Hot Toys’ retail partner Sideshow Toys:

The Venomized Iron Man 1/6 Scale Figure features two newly developed headsculpts — one half Venom and half Iron Man with a light up eye, and one fully “Venomized” head — as well as two interchangeable protruding tongues. The diecast Iron Man armor, with its stylish design, gleaming metallic finish, and glowing arc reactor, contrasts with the oily organic blue/black sheen of the symbiote and its protruding articulated pincers.

Venomized Iron Man is still up for pre-order, and can be secured over on Sideshow, here. Priced in at $425 USD, he’s scheduled to ship out some time from this month through September.

Jason's been knee deep in videogames since he was but a lad. Cutting his teeth on the pixely glory that was the Atari 2600, he's been hack'n'slashing and shoot'em'uping ever since. Mainly an FPS and action guy, Jason enjoys the occasional well crafted title from every genre.
@jason_tas
Previous Supernatural western Hard West II rustles up a PC release
Next Trick-or-Read! Marvel celebrates Halloween with a selection of new books