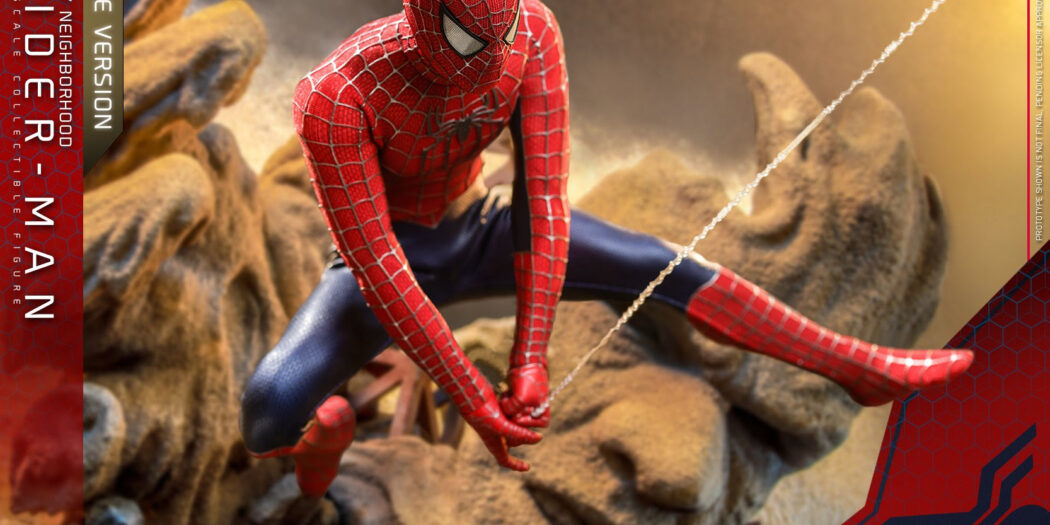 Tobey McGuire’s web-head is now an official part of the MCU, thanks to No Way Home, and is now a part of Hot Toys’ lineup of 12″ figures as well.

There’s no doubt that actor Tobey McGuire’s Spider-Man is an iconic one, and a fan favorite when it comes to movie Spider-Men. And now you’ll be able to add the No Way Home version of this hero to your collection. Or, you will eventually.

Friendly Neighborhood Spider-Man is 100% the Spidey from the Sam Raimi-directed blockbusters, including the unique look of his costume. With the original palette of red and blue, the suit has the raised silver webbing that made it pop so well on the big screen, 20 years ago.

Along with the staple Hot Toys attention to detail and articulation, this new figure will sport a range of accessories, and the Deluxe model will have a pretty awesome base.

The movie-accurate new Friendly Neighborhood Spider-Man 1/6 Scale Figure features a hand-painted portrait of Tobey Maguire, as well as a swap-out masked headsculpt, a beautiful recreation of Spider-Man’s red and blue suit with raised silver webbing, and a range of accessories including “Sandman’s cure,” a Spider-Man mask, and numerous web-shooting effects.

A Deluxe Version of the Friendly Neighborhood Spider-Man 1/6 Scale Figure also includes an impressive diorama base complete with a stunning depiction of The Sandman engulfing a crumbling metal structure — adding a new level of dynamism and drama to your Spider-Man display!

But wait, there’s more. If you buy the Special Edition version from Sideshow, you’ll also get a bonus in the form of a Doctor Octopus tentacle. The tentacle can snap onto the included Sandman base for a little extra villainous oomph.

Want some prices? The basic edition is priced in at $300 USD, while the Deluxe and Special Editions are both $445. If you want that tentacle though, it’s best to be quick, as that version is while supplies last only.

And as for shipping, all three are expected to be available some time from October of 2023 to March of ’24. So you’ve got a little while to pay it off if you choose a payment plan.

Jason's been knee deep in videogames since he was but a lad. Cutting his teeth on the pixely glory that was the Atari 2600, he's been hack'n'slashing and shoot'em'uping ever since. Mainly an FPS and action guy, Jason enjoys the occasional well crafted title from every genre.
@jason_tas
Previous DST adds TMNT Minimate 4pack for double the anniversaries
Next Unbox Hot Toys’ new Dark Trooper, set to ship this quarter