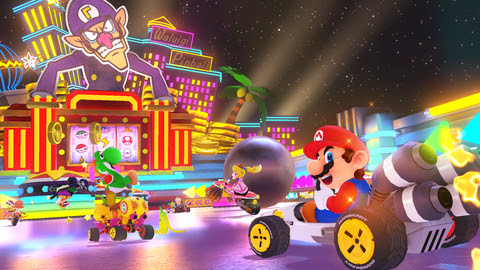 Mario Kart 8 Deluxe fans are about to get another dose of fresh courses, thanks to Booster Course Pass Wave 2, arriving this Thursday.

It’s kind of weird that Nintendo is (likely) going to be going a whole console generation with no new Mario Kart title. Yet here we are, deep into the Switch’s lifecycle and only a redux of the Wii U’s Mario Kart 8 to satiate fans.

That’s not to say that it hasn’t done its job though, since the game’s re-release did open it up to more fans. And it’s not like it hasn’t seen any ‘new’ additions either, since there’s the currently running series of Booster Courses.

This week brings Wave 2, which is packed up with another 8 courses, spread out over two new cups. Aside from the remakes, it also debuts Sky-High Sundae, which will also be appearing on the mobile game Mario Kart Tour at a later date.

Overall, the Pass system is set to include a total of 6 waves, each one with a now-standard 8 courses. If the math escapes you, that adds up to be a whopping 48 new tracks added into the already pretty beefy game.

You can likely expect one more drop to happen this year, as Nintendo says the program will wrap up in 2023. As for Booster Course Pass Wave 2, you can look for those courses to land on August 4th.

Jason's been knee deep in videogames since he was but a lad. Cutting his teeth on the pixely glory that was the Atari 2600, he's been hack'n'slashing and shoot'em'uping ever since. Mainly an FPS and action guy, Jason enjoys the occasional well crafted title from every genre.
@jason_tas
Previous The latest free update for Dying Light 2 brings new quest and more
Next This upcoming Robocop figure is part man, part machine, mostly Diecast