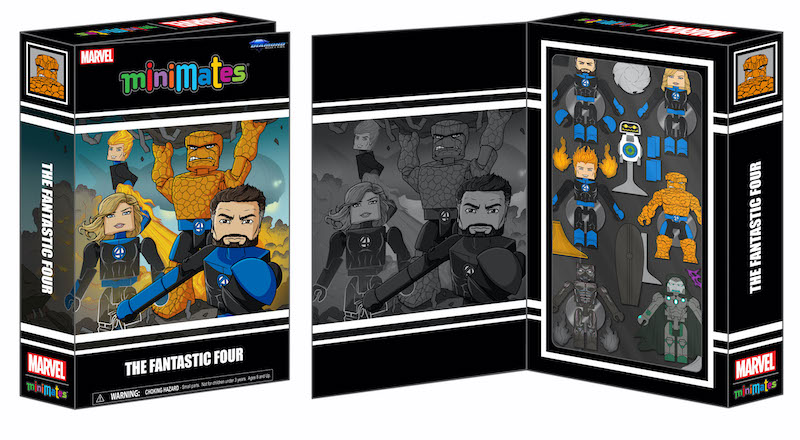 Marvel and Star Wars fan (especially Star Wars fans) should be happy this week, as DST has a pretty big selection of new stuff hitting stores.

So yes, there’s a lot of Star Wars stuff out this week from Diamond Select, with statues and busts landing. But while all of that cool, I’d say the drop of the week is actually a Marvel item. That’d be the new Fantastic Four box set of Minimates.

If you don’t know, Minimates are one off DST’s longest running lines, and are basically cute little mini-figures. Each one is about 2″ tall, and they usually come packed with some neat accessories. The new Fantastic Four set definitely covers those bases, and is pretty packed.

Now, it’s the recently modern FF that’s the subject here, so these figures are decked out in the black uniforms. And inside the box, you’ll find not just the FF, but also the Silver Surfer and Doctor Doom as the Infamous Iron Man. Plus there are those accessory items, which include HERBIE and a light-up “flame” stand for Torch. Slick stuff.

As for the Star Wars stuff, it’s all modern era as well, but is spread out well. Fans will find The Force Awakens, The Mandalorian, and The Clone Wars stuff. Scroll down for the full list.

Jason's been knee deep in videogames since he was but a lad. Cutting his teeth on the pixely glory that was the Atari 2600, he's been hack'n'slashing and shoot'em'uping ever since. Mainly an FPS and action guy, Jason enjoys the occasional well crafted title from every genre.
@jason_tas
Previous 1971: Indian Naval Front tells a historical (and niche) war story
Next Trailer: The Crown of Wu bings parkour and martial arts together in 2023