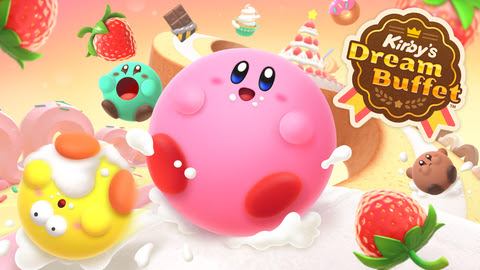 It’s setting up to be a smorgasbord of puffed-up, multiplayer rolling ‘n’ racing action this summer on Switch, thanks to Kirby’s Dream Buffet.

Kirby and food go together like… well like something, and that’s what’ll be centerstage this summer with Kirby’s Dream Buffet. The little guy will be on an all-he-can-eat roll through a series of obstacle courses, as he races against others of his… kind? Who knew Kirby was a species?

Apparent he is though, and it’ll be the biggest and fattest Kirby who takes home the gold in Nintendo’s latest.

Launching in Nintendo eShop on Nintendo Switch, the My Nintendo Store on Nintendo.com and at retail, Kirby’s Dream Buffet finds Kirbys rolling through a smorgasbord of food-themed stages in four rounds of frantic multiplayer fun. Players will race each other through these delicious obstacle courses to collect strawberries as Kirby grows, bumping other players off the stage and using familiar Copy Abilities – or Copy Food Abilities, as they are called in this game – to thwart the competition.

Nintendo says that the multiplayer-only racer will be adaptable for all skill levels. It should present a challenge since you’re playing against other humans, but also features “easy-to-understand gameplay for players of all skill levels”. So kind of a ‘pick up and play’ kind of thing then.

There is no release date just yet for Kirby’s Dream Buffet, but you can expect to see it both digitally and physically on the Switch at some point this summer.

Jason's been knee deep in videogames since he was but a lad. Cutting his teeth on the pixely glory that was the Atari 2600, he's been hack'n'slashing and shoot'em'uping ever since. Mainly an FPS and action guy, Jason enjoys the occasional well crafted title from every genre.
@jason_tas
Previous Sylvester Stallone to star as former superhero Samaritan this August
Next Happy Prime Day! Get ready for some free stuff from Prime Gaming and Luna