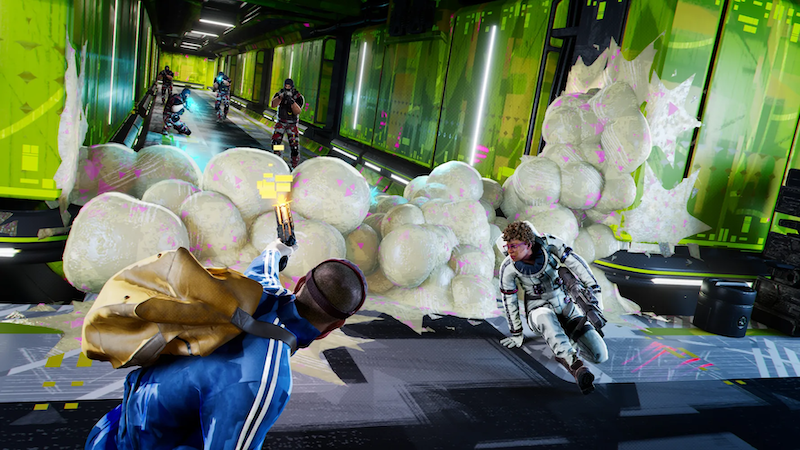 Ready for one weird-sounding FPS? Creative Assembly’s Hyenas is set in a strange future, where the goal is looting some Martian mansions.

Crime, in a future time

So here’s an interesting one. But before we get into the off the wall storyline behind Hyenas, it’s important to note that it’s spinning out of Sega and developer Creative Assembly. Yes, that Creative Assembly.

While the studio does have some other titles in its history (hello Alien: Isolation), it’s pretty much a name that’s been synonymous with strategy. Yet here we are, talking about it in conjunction with a brand new multiplayer shooter.

In HYENAS, the world is broken… literally. The billionaires have finally made it to Mars, leaving Earth and those tax bills far behind. The zero-gravity tech that powered their journey has shattered our planet, abandoning us in a drifting slum called the ‘Taint’. The only thing the rich care for is rare Merch, pop culture swag from the lives we left behind, which they loot from the rubble to furnish their Martian mansions.

Time for us to steal it back. Lumbering spaceship shopping malls, known as Plunderships, are plump with nostalgic booty stolen from Earth’s remains and packed with the sort of hired thugs, alarm systems and armed drones only the hyper-rich can afford. Assemble your crew of Hyenas from a ragtag cast of uniquely skilled and armed criminal misfits to get in, get the Merch and get the hell out.

So it’s fast and funny, with copious amounts of zero G, and has a kooky story behind it. But as far as the actual gameplay, Hyenas should be fairly unique as well. That’s because it sets up a bit of a different play-dynamic.

A quartet of 3 person teams will engage in the game’s action, as those team-members battle for the Merch. The team with the “spiciest haul” wins, according to the press release. Though of course, you’ll also have to make it our alive with that haul, which is where I assume the security teams come in.

The press release doesn’t mention those, so they might be player-controllable, or possibly CPU enemies. That’d mean a little PvPvE action of course.

Either way, there’s lots more to come on Hyenas, which is set for release on Xbox and PlayStation platforms, along with the PC, in 2023. Before we get to that though, there will also be an alpha test of the game, meaning you can get in on the Hyena action well ahead of launch. Click here to check that out, and sign up.

Jason's been knee deep in videogames since he was but a lad. Cutting his teeth on the pixely glory that was the Atari 2600, he's been hack'n'slashing and shoot'em'uping ever since. Mainly an FPS and action guy, Jason enjoys the occasional well crafted title from every genre.
@jason_tas
Previous Video: Sonic Origins Speed Strats returns with episode 2
Next Trailer: Construction Simulator reborn on PC and consoles, coming up later this year