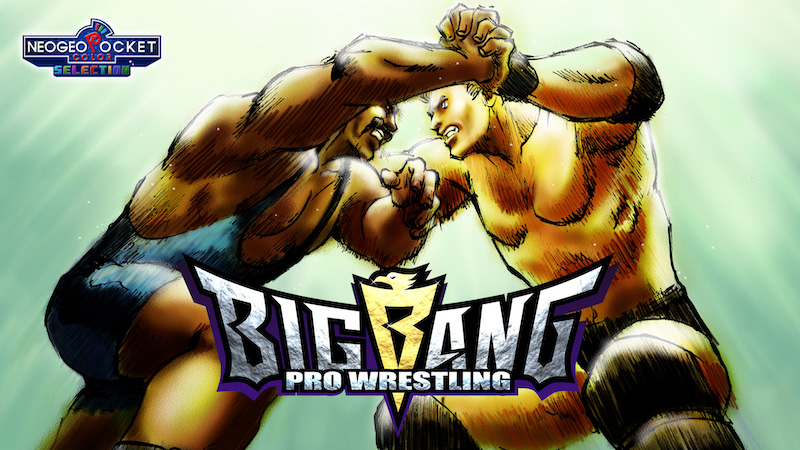 You might not be all that familiar with the latest NGP title to hit the Switch, but Big Bang Pro Wrestling is a fun take on the the squared circle.

At the turn of the millennium, wrestling was arguably as hot as it had ever been. For me personally, I don’t think the level of popularity rose quite as high as the Hulkamania era, but again it’s arguable.

Whatever you think about that, wrestling video games were definitely hotter than ever. With titles like the N64’s AKI-developed classics and the Smackdown series both rolling, that’s not all that debatable.

Once you go from the home consoles to the portables though, things got a little less great. I can’t think of any memorable titles that appeared on GameBoy consoles, for example. And as for the Neo Geo Pocket, which was very much alive at the time, there were none. In the US.

There was an import game though, called Big Bang Pro Wrestling. An original game without a license attached to it, BBPW debuted in 2000 and actually offered up a fun (if simple) time. And while it never got a port in the west, it’s finally getting its due for the modern Switch.

Clash of the champions

Big Bang is a pretty solid grappler, in terms of what it offers. It’s a sight better than some of the specifically-handheld wrestling games that I’ve played years back.

While there is an ‘arcade’ mode and one-off matches to play, you can hold a tourney and even add some modifiers to singles fights. You can play Normal of course, but also hardcore matches (with No Rules), and even Coffin matches.

True, it’s not all that much, but the extra match types are cool to have. And in the case of the Coffin match, rarely seen even in the big named titles. One very big thing is lacking though, is tag team competition. No, there are no tag options in the game. Since tag teams are such a huge part of the sport, that’s a bummer.

And now that I’m thinking about it too, a cage match option would have been nice too.

As mentioned above, Big Bang Pro Wrestling is a simple game. The NGP had only two buttons after all, and that’s all that this port serves up. If you have played pretty much any portable fighting game, then you know what to expect.

Big Bang uses the control pad (or stick) and the A and B buttons. Obviously, the stick moves your grappler, while the buttons let you attack, lock-up, taunt, pull off finishing moves, and more.

How do you get all of that out of two buttons? If you’re asking that, then you definitely haven’t played a handheld fighter before, because almost all of the action hinges on the control pad/stick. How you move that in conjunction with a button press, dictates the on-screen action.

I find this to be slightly annoying, since it’s very easy to do something that you don’t mean to. I will say that it’s slightly less annoying here than but usually is, but it is what it is.

I’ve covered a few of these SNK ports now, and the audio/video presentation portion of the article pretty much says the same thing every time. Namely, that the graphics look good enough, but they’re simple.

Big Bang Pro Wrestling though, has a really nice looking cadre of characters and backdrops that are more detailed than a lot of other NGP titles. Each wrestler has a unique look, and the characters have some terrific shading happening. The colors overall are nicer here than, I think, pretty much any other NGP title I’ve played.

Like with the cast, the arenas are really sharp looking too. Not that they look all that different from one another, but the colors are excellent, and each one features nicely detailed ringside areas.

As a fun little aside too, apparently a number of the wrestlers in the game are based on actual guys. There’s a “Goldberg”, a “Rock”, an “Undertaker” and more. Not that they look that much like the men they’re patterned after, but the move sets and personalities kinda/sorta fit.

Big Bang Pro Wrestling has a simple ‘pick up and play’ style, and features quick matches that are perfect for portable fun, and some cool nods to real wrestlers. If you’re looking for some fast grappling action, this might fit the bill.

Coming down the aisle...

Big Bang Pro Wrestling is a surprisingly fun handheld grappler with solid controls, and some sharp looks. It's definitely a mixed-bag in terms of modes though, and might disappoint current fans. Still, if you're looking for a portable wrestling game to play quick matches in, it's a good time.

Jason's been knee deep in videogames since he was but a lad. Cutting his teeth on the pixely glory that was the Atari 2600, he's been hack'n'slashing and shoot'em'uping ever since. Mainly an FPS and action guy, Jason enjoys the occasional well crafted title from every genre.
@jason_tas
Previous Trailer: City-building gets turn-based with As Far As The Eye
Next Trailer: Sonic Origins official, arrives this June with 4 Sonic classics