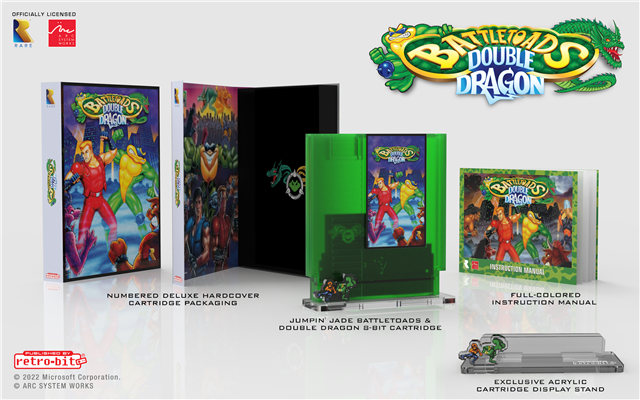 NES fans have something very cool indeed on the horizon from Retro-Bit. The retro company is set to re-release the classic Battletoads & Double Dragon.

Originally launched for the NES way back in 1993, Battletoads & Double Dragon brought two fan-favorite beat ’em up series’ together for the first time. Players could take it to the streets as either Billy and Jimmy Lee, or the trio of madcap Battletoads. The result was a side-scrolling action title that was just as tough as Double Dragon, but not quite as finger-busting as Battletoads.

The game saw launch for the relatively new 16bit consoles, but also for the NES, which was of course coming up on its last days. And that little gem is just what Retro-Bit has on tap as it’s next big release.

Along with the game, this new launch will include a fair shake of bells and whistles. Fans can expect a hardcover game box, full-color manual, and even an acrylic game stand for displaying the cart. Speaking of, that cartridge will be cast in translucent “Jade”. Fitting for the terrific toads.

The whole package is up for pre-order right now, and will be on offer through the 22nd of May (2022).

Jason's been knee deep in videogames since he was but a lad. Cutting his teeth on the pixely glory that was the Atari 2600, he's been hack'n'slashing and shoot'em'uping ever since. Mainly an FPS and action guy, Jason enjoys the occasional well crafted title from every genre.
@jason_tas
Previous Trailer: Rainbow Six Siege gets first new map in years with Emerald Plains
Next Trailer: City-building gets turn-based with As Far As The Eye