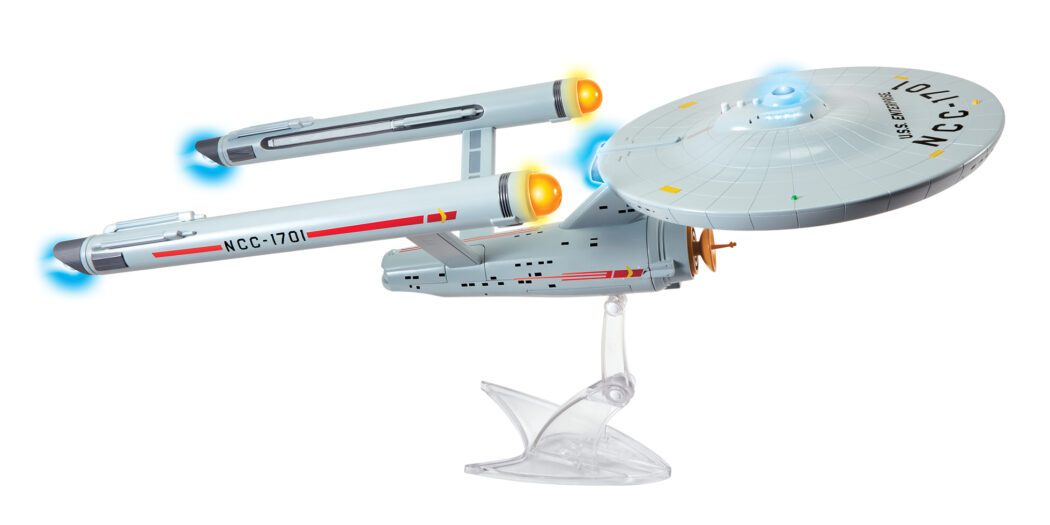 Following up on its original tease, Playmates Toys has revealed where the company will be taking its new Star Trek series of figures and vehicles.

One (line) to beam up

It’s been some time since Star Trek has had a stable retail line. Though perennially popular with fans, on the whole Trek has been more than a little spotty with its merchandise since the original Playmates Toy line wrapped up production in 1999.

It’s has moved to companies like Mega Construx, Diamond Select and others (even bouncing back to Playmates for a short time at one point). None of those lines seemed to be able to sustain however, although that might be due to the property itself having a limited foothold in modern pop culture.

But I should probably get off of that path before I get onto it. The TV and movie landscape of Trek is something that I could talk about for a long while, and that’s not the focus of this article. Toys most definitely are though.

A short time ago, Playmates Toys teased that once again it was the license holder of Star Trek. Playmates showed off a teaser image, which we published here, hinting at what was to come. But the speculation has officially ended, and the big reveal has taken place today.

And by that, I’m talking about fans of the Original Series and The Next Generation eras. Both of those take the spotlight, with 3 initial figures each, as well as a role-play item and a replica starship.

The figures will all be in the 5′ scale. Yes, that is different than the classic Playmates Trek figures. It’s also not in the scale of the majority of the collector-favored lines that are out there right now, which tend to be 6-7″. Honestly, it’s kind of a strange choice.

Each figure will sport 14 points of articulation as well, and presumably include a range of accessory items. I have to say “presumably” because nothing is mentioned in the press release.

As for the Enterprise, that’ll be 18″ in length, and include sound effects and more. Really cool however, is that fact that all of the classic stuff will be packed in throwback packaging. So if you liked the 90s Playmates card designs, you will probably dig this.

Just a note too, that the modern stuff will be in what’s dubbed “new universe” packaging. And that’s kind of an interesting designation all by itself.

While you only see classic characters and the original Enterprise in the images above, there will be more coming to retail. Check the full line out here. And yes, that includes figures coming from Star Trek Discovery.

STD will have 2 figures in its first wave though, read into that what you like.

All of the stuff you see mentioned here will be on the way to retail this summer, and it appears to be it for 2022. Not to worry though, as there’s more on tap for ’23. Playmates says that it “will continually expand the Star Trek collector line with fan-requested favorites based on the dozens of Starfleet heroes and infamous aliens featured in the brand’s 13 motion pictures and 11 live-action series”. So fan favorites are definitely a priority.

Stay tuned, we’ll have more to come as it is announced.

Jason's been knee deep in videogames since he was but a lad. Cutting his teeth on the pixely glory that was the Atari 2600, he's been hack'n'slashing and shoot'em'uping ever since. Mainly an FPS and action guy, Jason enjoys the occasional well crafted title from every genre.
@jason_tas
Previous Video: The road to Weird West rains down lightning in latest dev diary
Next Daredevil kicks off new comic book run in June