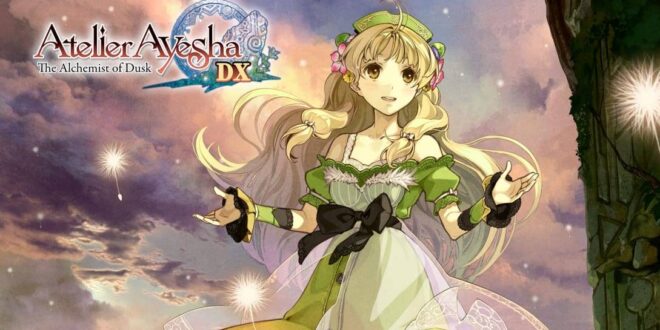 As a video game journalist on a tight budget, it’s hard to pay the full retail price for a video game especially when I want to jump into something new or support a re-release on modern consoles. But as I’ve found through trial and error you can get more value for your money by waiting for sales or buying a video game series collection that has at least three games on one cartridge or digital download. If you are a JRPG queen or king like me that’s been diving into the Atelier series lately, then you should know that it has three collections available which are the Atelier Arland Series Deluxe Pack, Atelier Dusk Trilogy Deluxe Pack, and Atelier Mysterious Trilogy Deluxe Pack.

These deluxe packs are a great starting point if you don’t know where to jump in and find it helpful to have a good selection to start with. This brings me to the next stop on our Atelier journey with Atelier Ayesha: The Alchemist of Dusk DX. I previously wrote a snapshot review on Atelier Rorona: The Alchemist of Arland DX so please check it out if you haven’t already!

One day while visiting her sister Nio’s grave, Ayesha Altugle an apothecary is given a cryptic message by a mysterious man who tells her that Nio could still be alive and if Ayesha wishes to solve the mystery then she must learn about alchemy and the glowing flowers that are situated at her sister’s resting place. As the man leaves, he whispers that “she” has at least three years. Ayesha is left confused and has lots of questions but she must find the answers on her own. Strengthened with hope and courage Ayesha sets off on a heartfelt journey.

Compared to Atelier Rorona: The Alchemist of Arland DX which focuses heavily on synthesizing items and completing assignments that are required to move the story forward, Atelier Ayesha: The Alchemist of Dusk DX is a story-driven JRPG in both the central events and character side stories. You still synthesize items of course as it wouldn’t be an Atelier game without it but it’s not the main focus of the story. Instead, I found synthesizing as something you do to make items to use in and outside battle, delivery requests, character side-quests, and occasional story beats. However, it’s still a fun system regardless.

Some players may feel that Ayesha is an airhead and have a hard time taking her seriously but I respectfully disagree— I saw her as a ray of sunshine and was impressed by how she kept moving forward despite her deep losses in life. As a character, she reminded me that no matter how heavy your heart is from the burdens you carry everything will be okay, and faith is everlasting. Ayesha is one of my favorite protagonists today.

Since she doesn’t know what an alchemist is (and even when she gradually starts to learn about it) Ayesha is uncomfortable when people refer to her as such so she likes being called an apothecary (someone that makes and sells medicine) because it feels natural to her. Staying true to yourself isn’t always easy, but when you do it feels awesome!

Time Crunch Or No Time Crunch? That Is The Question

Unfortunately, I was trolled by Atelier Ayesha: The Alchemist of Dusk DX because when I played the game for a few hours I was on cloud nine and thought that there wasn’t a time crunch in story progression and that I could play at my own pace while doing as many sidequests as I wanted. But there is an overreaching time limit of three years. Remember the mysterious man Ayesha meets at the beginning of her story?

Yep. There was truth to his words and just like Atelier Rorona: The Alchemist of Arland DX time passes with everything you do— but here is the reason why I thought the time crunch wasn’t something to be concerned about. The game tutorials don’t explain that it has a time limit to find Ayesha’s sister, so when it hit year two I was continuing my playthrough as normal and focused on the optional stuff. When year 2 came to an end time had reset and I was back to the start of year 2. I was thinking: “Okay. As long as I don’t rush to meet the story beats then there’s no rush!” But I was wrong. That was only a brief respite since when it hit March (on the third or fourth day I think?) of year 2 time fast-forwarded to year 3. I’m still not sure if I was penalized for trying to exploit the time mechanics but I guess we’ll see as I continue the story.

When it comes to sidequests (also known as delivery requests) the deadlines are much more LENIENT and there is no penalty if you can’t complete them on time. The most that will happen is that you will get a lower reward, but it’s best if you aim for meeting the deadline so you can get the maximum reward. I had a situation where I had to deliver a certain item to a villager but didn’t have an ingredient to make it. Once a specific area opened up and I got the ingredient, I was able to make the requested item and I had 28 days left before the due date. The point here is if I wasn’t able to meet the deadline it wouldn’t be a big deal. In Atelier Rorona: The Alchemist of Arland DX since you have to build Rorona’s reputation as an alchemist in addition to keeping the workshop open, it’s imperative that you meet the deadlines for any side-quests she takes on or you risk having her reputation lowered.

And as a side note: items in shops are affordable and making money is a lot easier!

Ayesha And Friends Can Protect Each Other In Battle!

Atelier Ayesha: The Alchemist of Dusk DX is a turn-based JRPG but has a more robust system. Unlike Atelier Rorona: The Alchemist of Arland DX where party members only protect Rorona, Ayesha and her friends can protect and support each other in battle in the following ways thanks to Active Support Commands:

There is a surprise once you hit level 30 with your party members but I’ll let you guys experience that for yourselves as I don’t want to spoil it for you!

Character interactions are more involved in Atelier Ayesha: The Alchemist of Dusk and I loved participating in the side stories and helping the characters solve their problems as they bonded with Ayesha. Whenever you see a character icon next to a place in town then that means a side story can be activated. With Atelier games it will take multiple playthroughs to see each ending so decide which side story resonates with you the most!

Atelier Ayesha: The Alchemist of Dusk DX improves on many things that Atelier Rorona: The Alchemist of Arland DX falls short on. It’s recommended for new players not to be so hard on themselves during their first playthrough and not be scared of failing because you are just learning about the game mechanics, and with a time crunch that can be difficult. The story of Ayesha and her sister Nio is heartfelt and I’m glad that this JRPG goes back to its genre roots embraces the art of storytelling!

Ayesha is on her way to find her sister Nio and with her courage and determination, she will find her!

Hey! I'm Nadia! I am a big fan of RPGs and you can almost always catch me playing one in my spare time. Writing is my passion, and my intention is that you all learn something through my work!
Previous Trailer: Santa and Frosty are ready to rock in Killing Floor’s Christmas update
Next The universe of Microsoft’s blockbuster is laid out in The Halo Encyclopedia this March