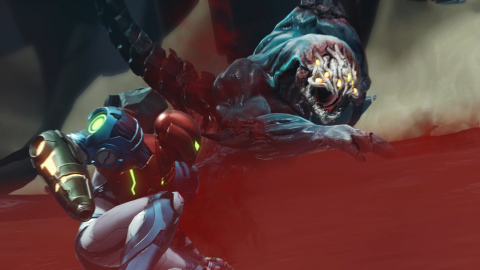 The long awaited, and formerly cancelled Metroid Dread finally makes its way to a Nintendo console today, as the side-scroller hits the Switch.

In the Metroid Dread game, the story of Samus Aran continues after the events of the Metroid Fusion game, as she descends upon planet ZDR to investigate a mysterious transmission sent to the Galactic Federation and search for the lost research team. After a harrowing encounter with a living Chozo – a race previously thought to be extinct – she wakes up deep below the surface of the planet. The remote world is inhabited by vicious alien lifeforms and chilling mechanical menaces, including the imposing E.M.M.I., DNA-extracting research machines that are now hunting Samus.

While traversing the many environments of planet ZDR, players will acquire new and familiar abilities, like the new Storm Missile or classic Speed Booster. Return to areas and use abilities to find upgrades, alternate paths and a way forward. Explore the sprawling map, evade and destroy E.M.M.I. robots and overcome the dread plaguing ZDR.

Metroid Dread is out now, in both physical and digital format on the Switch.

Jason's been knee deep in videogames since he was but a lad. Cutting his teeth on the pixely glory that was the Atari 2600, he's been hack'n'slashing and shoot'em'uping ever since. Mainly an FPS and action guy, Jason enjoys the occasional well crafted title from every genre.
@jason_tas
Previous Apocalypse’s Horsemen ride again in X-Men Legends #11
Next Trailer: Experience non-violent role-playing in Those Who Came