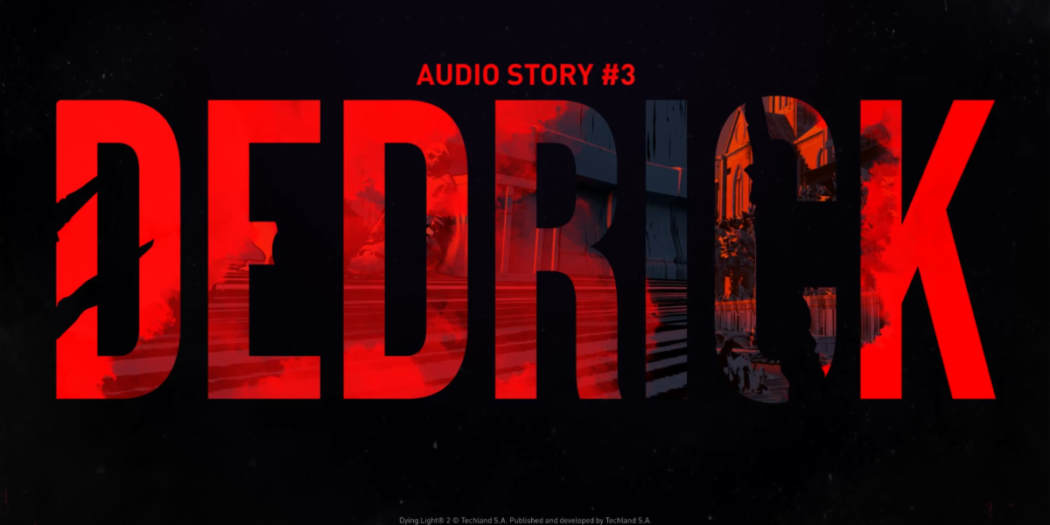 The world of Dying Light 2: Stay Human continues to expand with the audio story series. This time it’s “Dedrick”, a story about a father and daughter.

Death and the City

If you haven’t been keeping up, Dying Light 2 is a bit of a different game than its predecessor. It’s still got all of the themes of that game, but it takes place in a city. While sprawling, and seems to be relatively safe, it’s also the last human controlled city, maybe anywhere in Techland’s harsh post-apocalyptic world.

The game has actually seen a bit of delay, pushed from this fall to early 2022. But to keep fans engaged, the developer has been releasing audio stories that dig into the new locale.

The third one has just arrived, in the form of Dedrick, and centers on a father’s search for his missing daughter in this hellish new world. Spoiler alert: these aren’t cheery.

A tragedy often begets another, and even more so in The City. One such tragedy has become a tale shared in quiet moments by the few survivors who yet remember it. In the middle of a ruined city on the brink of human extinction, a father loses his daughter. When he finally finds her, he makes a choice that changes more than one life. Want to know what happened? Listen to “Dedrick” and let us tell you.

If you enjoyed this foray into Dying Light’s terrifying universe, the you’ll be happy to know that more is coming. Techland intends to continue the audio segments, but also branch out into presumably video as well. That should fill in the gap nicely till Dying Light 2: Stay Human arrives on consoles and the PC on February 4th, 2022.

Jason's been knee deep in videogames since he was but a lad. Cutting his teeth on the pixely glory that was the Atari 2600, he's been hack'n'slashing and shoot'em'uping ever since. Mainly an FPS and action guy, Jason enjoys the occasional well crafted title from every genre.
@jason_tas
Previous Trailer: Warner Bros unleashes Red Band look at Injustice
Next Trailer: Get boots on the ground in the deadly world of Insurgency: Sandstorm