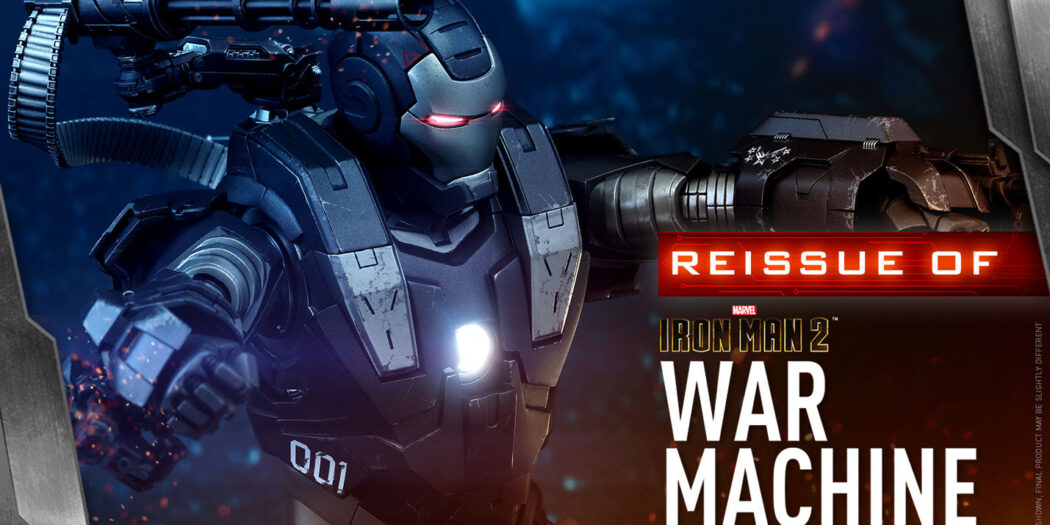 Did you miss out on Hot Toys’ War Machine the first time around? Well, if you did then you’ll be happy to know that the figure is back. Landing this time in the midst of the company’s Iron Man 2 figure-onslaught, Jim Rhodes is just as great as the first time his figure saw release.

Of course, if you know Hot Toys’ movie stuff, then you already know that they shoot for maximum authenticity. As such War Machine is looking like he just stepped off the silver screen. And yes, that includes a pretty fantastic head sculpt of actor Don Cheadle, as he appeared in the role.

Past that, War Machine has an alt-head (with closed visor) that lights up and interchangeable “battle damaged” parts. So you can create whatever look you like from the film. Leaning more towards the damaged parts too, there’s an awesome-looking base included that mimics the landscape from the final battle with Whiplash.

War Machine is set to ship out just about a year from now, in the July/August 2022 timeframe. He’s priced in at $375 USD, and is ready for pre-order now.

Want to make a whole Iron Man 2 shelf? Maybe a super-detailed diorama or two? Then you’ll be pleased as punch to know that Hot Toys has a full lineup ready to go.

That includes Tony Stark, as featured in his ‘suit up’ scene on the race track and Whiplash from that same movie-moment. On top of them, there’s also the fully suited-up Iron Man Mk.5 armor.

All of the above are on the calendar and ready to be pre-ordered now from Hot Toys parents at Sideshow Toys. Well, that is to say excepting Whiplash. He’s actually available right now, so you can add him to your collection ASAP. Hit the links above to check ’em out.

Jason's been knee deep in videogames since he was but a lad. Cutting his teeth on the pixely glory that was the Atari 2600, he's been hack'n'slashing and shoot'em'uping ever since. Mainly an FPS and action guy, Jason enjoys the occasional well crafted title from every genre.
@jason_tas
Previous Warhammer Age of Sigmar: Tempestfall gets gameplay trailer, and closed beta
Next Trailer: Terra Nil builds its city, but kind of in reverse