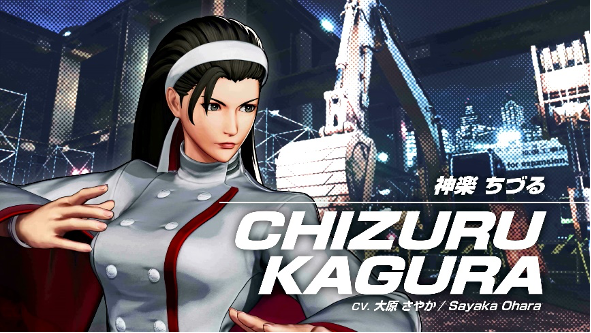 SNK has a lot happening here in 2021, including SamSho DLC, and the launch of the newest game in its flagship fighting series, King of Fighters 15.

The King is back

So yes, there is Samurai Showdown stuff to talk about (including a pretty awesome little surprise). But there’s even more King of Fighters 15 news on the table before we get to that. That’s news that includes the announcement of a new team – Team Sacred Treasures.

If you don’t know the series for some reason, KoF typically revolves around teams of 3. Those squads are made up of fighting game characters from around SNK’s ‘modern’ universe. So while Samurai Showdown isn’t included, you’ll find the likes of Art of Fighting, Fatal Fury and more. And that’s not counting the game’s own characters, of which there are a few.

Team Sacred Treasures here, is made up of Chizuru Kagura, Kyo Kusanagi, and Iori Yagami.

Here are looks at all of them in action:

Chizuru Kagura is a descendant of the Yata clan, one of three powerful clans entrusted with the Sacred Treasures capable of sealing away “Gaia’s Will”, otherwise known as Orochi. Her fighting style resembles traditional Japanese dancing, while her access to the Kagura Style of Ancient Martial Arts allows her to seal away her opponent’s abilities.

She convinces heirs of the other two clans, Kyo Kusanagi and Iori Yagami, to once again join forces and enter the latest KOF in the hopes of revealing the powers behind the appearance of the being known as Verse and the weakening of the seal on Orochi.

Though his biggest rival is Iori Yagami, they are both left with little option but to put aside their differences and team up once again for this latest KOF to hopefully prevent Orochi from resurrecting.

The Yagami clan is one of three ancient clans entrusted with a Sacred Treasure. As a descendent of this clan, Iori has access to abilities that allow him to tear apart his foes, and powerful amethyst flames granted by his knowledge of the Yagami Style of Ancient Martial Arts.

His ancestors signed a blood-pact with Orochi 660 years ago, sparking a feud with the Kusanagi clan. Despite this, he decides to up-hold his duties as a member of the original sacred clans and joins KOF.

King of Fighters 15 is coming up this year, but has no official release date just yet.

Back to the past

As for the Samurai Showdown news, there’s some pretty slick stuff. That all centers on season pass 3, and that begins with the return of Cham Cham. A SamSho classic, Cham Cham kicks off the third season of content for the game.

And yes, she looks exactly how you’d expect.

CHAM CHAM is the younger sister of a powerful warrior residing in a village in Green Hell, a lush forest located in South America. Together with her monkey pal Paku Paku, CHAM CHAM often leaves the comfort of her village to go out and explore—oftentimes getting herself into dangerous predicaments.

This time, however, she leaves on a mission to find her big brother. Her moves are hard to read due to her reckless and bold nature, so be prepared to suffer the consequences if she’s had enough playing around.

And as mentioned, there is one more announcement. One of the new characters arriving in season 3 will be a crossover fighter, from Guilty Gear. Yep, that’s kind of out of left field, but nonetheless pretty cool stuff.

As to who it might be, well that’s not just ready to be revealed yet. However we do know that it will be the fourth character to be delivered. So basically, he or she is still a ways off at this point.

Season 3 though, is not a ways off. The new collection of content begins next month, on March 16th. Aside from Cham Cham, you’ll so be getting a free update on that day.

The new download will include “the new Guard Crash mechanic”, and some fresh balancing. So there’s plenty to look forward to for fans of the duel.

Jason's been knee deep in videogames since he was but a lad. Cutting his teeth on the pixely glory that was the Atari 2600, he's been hack'n'slashing and shoot'em'uping ever since. Mainly an FPS and action guy, Jason enjoys the occasional well crafted title from every genre.
@jason_tas
Previous Tony Hawk’s Pro Skater coming to Switch, PS5, and Xbox Series X|S this year
Next Mezco One:12 Collective Moon Knight (Action Figure) Review