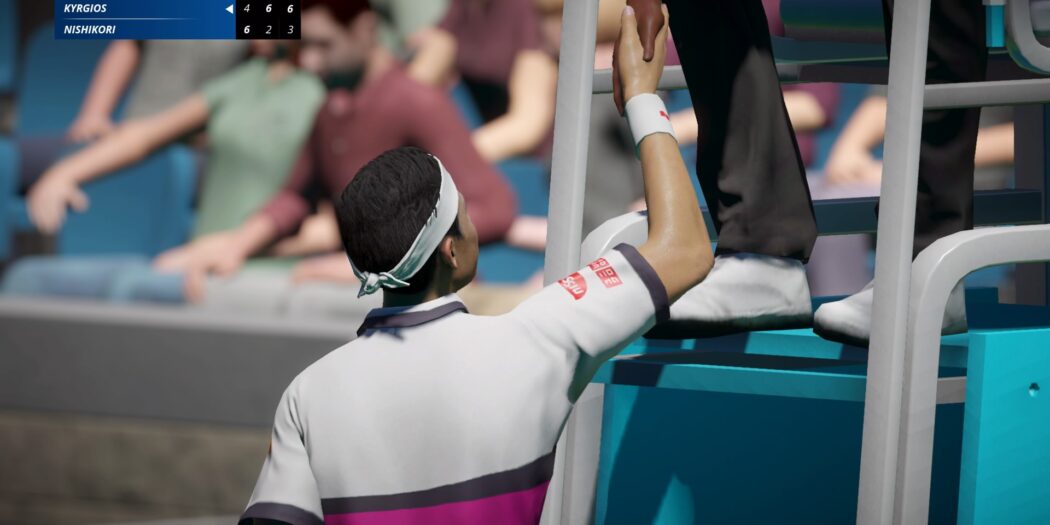 You can challenge the umpire on this, but….

Tennis World 2 has the things you’d expect of a tennis game, on and off the court. From drop shots and exhibition matches to volleys and a Career mode, developer Big Ant Studios has put it all in. It’s just not their best set.

If you’re coming to Tennis World Tour 2 like me, right off of the heels of Mario Tennis Aces, then you’re going to be in for a rude awakening.

Timing is everything in Tennis World Tour 2. Mess it up while going for a winner, and you’ll see your ball fly out. The window can be demanding, but it is not an unassailable challenge.

The real issues on the court come from the way the game handles movement and animations. Your character moves in many ways automatically. Sometimes, they’ll swing even if you don’t hit a button (this won’t go in), and other times just watch the ball go by. It can be a struggle to have them do precisely what you want, especially when they commit to an animation against your will. This is made worse when you expect the character to move while preparing your aim. Countless times I’ve walked away from a serve trying to load a charged return, while on other points I’ll do the exact same thing and the character will stay in position.

The worst are the predestined points, wherein the crowd will start to cheer before the ball has even hit the ground, and my character will hang their head in shame as if there isn’t a sprint button that will clear the distance. I once pressed the lob button for a return, but because the point was already decided (despite the ball not yet hitting the court), that button press was instead read as queue highlight.

As a local-multiplayer tennis game, Tennis World 2 is sufficient at best. It feels and looks like tennis. Rallies last, hits mostly go where you expect, and even if you haven’t mastered the expectations for timing, you’ll have decent fun.

Online (which ran well during our post-launch play sessions) is a similar story. People make mistakes, and you’ll feel like you’re walking them all around the court with your expertly placed shots.

It’s against the AI when you realize that people is all you’ll ever be, and you’re up against the machine.

Career mode starts you with a custom-built character (using preset facial features and limited fashion) at the bottom of the rankings. Spending your time playing exhibition matches, doing training challenges, and hiring agents fills your pockets with the game’s currency and experience, which are in short supply in other modes.

How short? For a one-versus-one, three-set match at six games each, I earned under 300 coins. For a one-game match in career mode, I earned 720.

Early equipment is decently priced under 10,000, but rackets and card packs (we’ll get back to card packs) are both an unattainable grind for people hoping to progress in any way from local play.

(For the record, I won a quick match online and was awarded zero.)

It’s painful that money and experience both come so slowly, because your Career character will start with stats in the twenties. For comparison, Nadal averages 90s across the board. Even your no-name, auto-filled early-career competitors have a base in the 40s.

What does this mean in practice? Your shots will go wide, your serves will be slow, and you’ll be at a distinct disadvantage throughout the Career mode. Aiming for corners with anything less than a “Good” is a good way to lose a game.

Which, frankly, matters little. Exhibitions pay out identically win or lose. Often, it’s better even to throw a match to complete a challenge, because those hugely increase your take-home. There’s no real rush to improve your ranking, either, so you can grind up stats for a few years while gradually getting a handle on the AI, shot timing, and serves. It’ll take a bit of time to get anywhere near the level of Federer or Nadal. Experience gain is slow, and a level-up only increases your stats by 0-3 at a time.

These stats aren’t precisely self-explanatory. Is front-hand accuracy? Strength? And why does leveling your precision increase your precision stat less than leveling defense? Like many other parts of the game, everything changes in such minute fractions that changes won’t be clear level to level.

Outside of Career Mode, there is nothing really worth working towards. Outfits and rackets purchased by coins can’t be attached to other characters, making them exclusive to your customs. That leaves cards.

Cards are limited-use actives that give miniscule advantages for a match or a game, such as giving increased stamina use for certain shots to your opponent. Generally, they’re so small that it’s not even worth changing the way you play to react. They’re definitely not worth spending your coins on. Card packs at varying rarities supply the jolt familiar to loot-box games, except without any worthwhile reward. Collect them, equip them, use them: they don’t make much of a difference, either way.

You can’t turn them off, either. They sit on the screen, delaying the start of some points because the AI is rifling through theirs. At least you can’t buy them with real money?

Tennis World Tour 2 is not a looker by any stretch of the imagination. Outside of serve routines, animations are shared by all the players. You’ve never seen Kei Nishikori this smug or Nick Kergios this calm. The lack of personality makes it difficult to believe that’s who is on the court. Colors are garish at best, with a plastic sheen for all your players. Even that can be distracting: there’s a glaring bald spot on my custom character’s head whenever the lighting hits him right.

It looks like tennis, and, just as serviceably, it sounds like tennis. There’s a crowd, an umpire, and balls hitting rackets. No announcers follow the action in your game, and there’s no music during play. Tunes jingle on the menus with enough energy, but it feels like something is missing from the action. Maybe I’m just too used to tennis on the television having stats read at me by retired players.

That’s an emptiness that carries throughout Tennis World Tour 2’s presentation. If you are looking for a single-player Tennis experience, it’s here in Tennis World Tour 2. It’s a decent tennis game with unnecessary card fluff, a slow grind, and difficulties that aren’t suited to a casually interested tennis fan. And that’s on the best day. The occasional freeze, frustrating animations, and visual oddities don’t make matters any better. You don’t have to skip Tennis World Tour 2 if you’re desperate for a new tennis game, but if you have one you like, then stick to it.

Tennis World Tour 2 has singles and doubles tennis, but a litany of issues keep it from being the premier champion of the sport. Even if you're desperate for another tennis game, you're probably better off looking elsewhere.

Brutal Gamer's Nintendo Editor began his gaming life a little late- at five years old. But he's made up for it in the two decades since, gaming and writing about gaming with the same passion, fervor, and unrelenting love as his five-year old self.
Previous Metal Gear, Castlevania, and Contra games hit GOG.com
Next New DC, Marvel and more arriving from DST this week