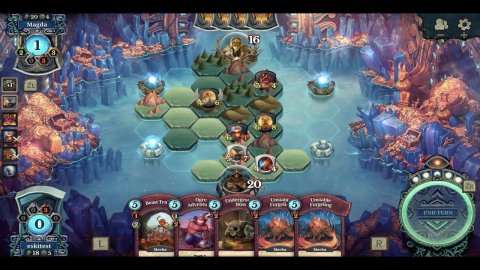 Board game/card battler Faeria arrives on the Switch this week, along with the first Neo Geo Pocket games to grace the console, and much more.

Board games come to life

The Nintendo Download makes a special point of saying how Faeria’s play-space is a board is a “living board”. And honestly, for what it is, the game actually looks like it might be kind of cool.

I’m not a fan of the genre in the least, but Faeria looks fairly detailed and has a nice pop of color to it. Seems like something that card-battler fans might want to check into.

Other than that, we also get the first Neo Geo Pocket games from SNK for the Switch. Those arrive in the form of cute lil’ fighting games Samurai Showdown! 2 and Kind of Fighters R-2.

Then there’s also Lynn, which is a puzzle-platformer, according to the press release. It’s a title that seems to feature some simple, yet attractive visuals. And it’s alleged to get you thinking too, always a good thing.

If none of the above float your boat though, there’s plenty more. This week is a pretty full one for the Switch (and there’s even a 3DS game).

Jason's been knee deep in videogames since he was but a lad. Cutting his teeth on the pixely glory that was the Atari 2600, he's been hack'n'slashing and shoot'em'uping ever since. Mainly an FPS and action guy, Jason enjoys the occasional well crafted title from every genre.
@jason_tas
Previous AtGames’ Legends Ultimate arcade machine gets a second run
Next A Total War Saga: Troy is out/free for 24 hours via Epic