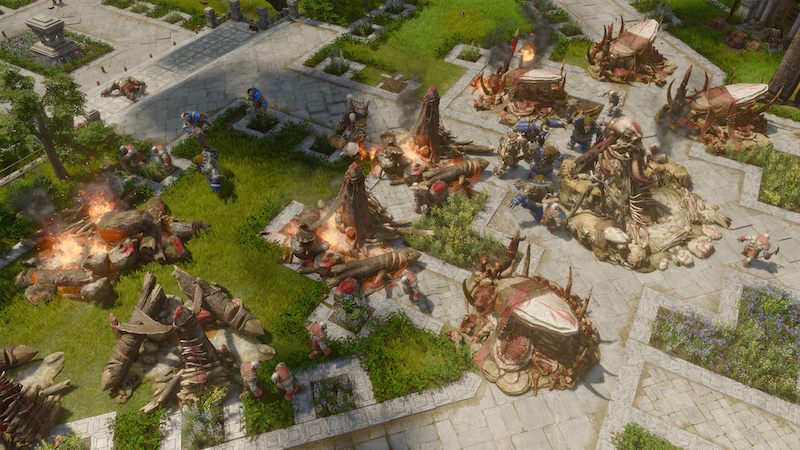 The trolls are coming to Spellforce 3. The PC strategy title is getting a monstrous infusion of single player content in the form of a new campaign.

Originally released back in 2017, THQ Nordic and Grimlore Games’ Spellforce III has proven its place in the strategic landscape. The PC title combines RTS and RPG elements to create an experience that’s both familiar and new, and it looks pretty terrific doing it. Even with it being three years old, this is still a good looking strategy game.

Now it’s getting a tremendous dose of new content too, in the form of Fallen God. A standalone expansion for SFIII offering 15 hours of play, Fallen God doesn’t require players to have tried the base game at all.

It’s unique too, in that it focuses on a fantasy race that’s more or less always played second-fiddle. Taking center stage are none other than trolls, and I don’t mean the ones with the wild hair.

When the gods have abandoned you, there is only one hope for salvation: Find a new god! This is the conclusion Akrog, chieftain of the Moonkin trolls, comes to. He leads his clan through the continent of Urgath, struggling to survive. The player’s mission is to guide the new playable faction, the trolls, through an all-new 15-hour long singleplayer campaign. SpellForce 3: Fallen God is a standalone expansion and can be played without having played any SpellForce game before (but we would encourage everyone to do so!) New features for the singleplayer campaign include:

In addition to all of the above, Spellforce III: Fallen God also has a host of other improvements. Players will explore a totally new continent, shape their “companion” character through their actions, and enjoy full Steam Workshop integration with the ability to craft maps and mods.

Ready to dig in? Spellforce III: Fallen God hits the PC this year.

Jason's been knee deep in videogames since he was but a lad. Cutting his teeth on the pixely glory that was the Atari 2600, he's been hack'n'slashing and shoot'em'uping ever since. Mainly an FPS and action guy, Jason enjoys the occasional well crafted title from every genre.
@jason_tas
Previous Street Fighter, Robotech pinbooks and Terminator bookend debut from Icon Heroes
Next Coming Up: The games of June 2020