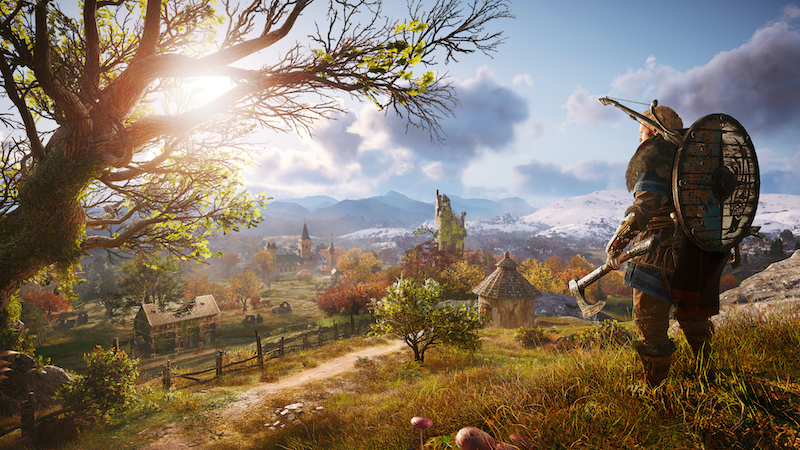 We first saw Assassin’s Creed Valhalla in action not too long ago. The game brings the history-spanning saga to the age of the viking. In it, norsemen invade the frigid shores of Dark Age England from their ice-encrusted homeland in the far north.

The game is stocked with huge battles, sea-faring action, plenty of combat, and the return of the hidden blade… viking-style. While we saw the game in action, we apparently didn’t see the next generation edition. Today Ubisoft corrected that thanks to the first of Microsoft’s Xbox 20/20 presentation.

“As developers, we’re always excited to work with new hardware because it gives us a greater ability to express our creative vision. Assassin’s Creed has always been committed to exploring new technologies and leveraging new consoles abilities to deliver the most immersive experience possible. We are excited to be collaborating closely with Microsoft to bring Assassin’s Creed Valhalla to the Xbox Series X”

Obviously, the looks of the game will be improved upon for the Series X edition. But Ubisoft says that it’ll also benefit from faster loading times. We’ve seen that in action before of course. Some developers have recently shown just how limited load times can be on next-gen consoles.

Additionally, Ubi says that Valhalla on the Series X will sport Smart Delivery. What’s that? It means that you’ll be able to buy the game just once, but play it on either the Xbox One or the Series X. A pretty nice initiative from Microsoft, that.

Assassin’s Creed Valhalla and the Xbox Series X will be on store shelves this Holiday season.

Jason's been knee deep in videogames since he was but a lad. Cutting his teeth on the pixely glory that was the Atari 2600, he's been hack'n'slashing and shoot'em'uping ever since. Mainly an FPS and action guy, Jason enjoys the occasional well crafted title from every genre.
@jason_tas
Previous Creepy first-person/horror title Scorn hitting Xbox Series X
Next DIRT 5 announced for next-gen, gets new trailer