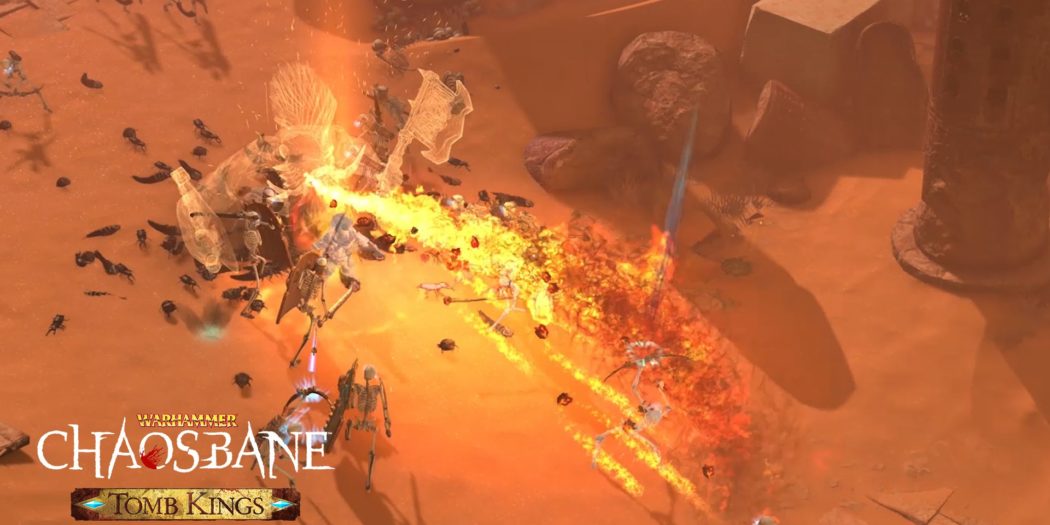 The necropolis awaits. Venture into the Egyptian-influenced land of the dead in the new expansion for aRPG Warhammer: Chaosbane.

The first action RPG based in Games Workshop’s fantasy realm, Warhammer: Chaosbane arrived earlier this year to some acclaim. We loved it here at BG. The game brought many of the best elements of the genre to a world that hadn’t seen it previously. If you’re a fan of either, it’s worth checking out.

Now that’s even more true, thanks to the cool looking Tomb King DLC. The new infusion of single-player content explores a part of the Old World that hasn’t been seen. Namely, one that’s very reminiscent of the sands of ancient Egypt.

In The Tomb Kings DLC for Warhammer: Chaosbane, you are taken to the dangerous necropolises of the Land of the Dead. Once a civilisation at its peak with impressive cities and people of noble lineage, the lands of Nehekhara have now been reduced to sand and buried ruins after the treachery of the evil Nagash. Explore an all-new environment and experience the desert landscapes of the Land of the Dead. Help the Amethyst Order in a quest that will expose you to the dark secrets that lie in the ancient crypts of the Tomb Kings. With a completely new adventure to complement the main campaign, the Tomb Kings DLC features an original story and introduces scores of new enemies from the Warhammer universe. Travel the arid deserts of Nehekhara and explore 10 ancient Tombs with varied gameplay that have been sealed for a millennia. Solve environmental puzzles, protect magisters of the Amethyst Order and discover dangerous artefacts in the ancient temples of the Land of the Dead.

Ready to go adventuring again? Tomb Kings is ready to add onto your base version of Warhammer: Chaosbane on the PC right now. Xbox One and PS4 editions will land early in 2020.

Jason's been knee deep in videogames since he was but a lad. Cutting his teeth on the pixely glory that was the Atari 2600, he's been hack'n'slashing and shoot'em'uping ever since. Mainly an FPS and action guy, Jason enjoys the occasional well crafted title from every genre.
@jason_tas
Previous Spider-Woman to grace new selection of variant covers
Next X-O Manowar to return the Valiant U this March