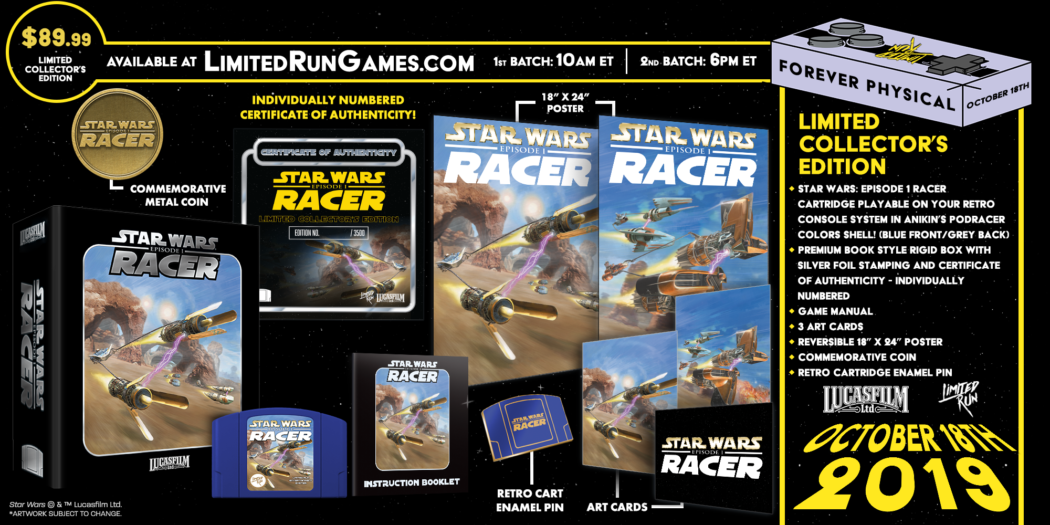 Now this is podracing!

Yes, it’s most definitely podracing, and it’s back once again thanks to Limited Run Games. This time, the internet storefront has revived the classic N64 Star Wars themed racer. That means a new go-around of physical editions for the classic N64.

As is common with LRG, that’ll result in a few different options for buyers. But even if you opt for the standard version of the game, you’re still in for one cool looking cart.

Two Engines. One Champion. No Limits. Climb on, strap in, and experience the pure adrenaline-pumping excitement of the Podracing sequence from Star Wars: Episode I The Phantom Menace.

Take the controls as Anakin Skywalker, or any one of over 21 Podracers, and feel the full-force blast of two massive jet engines at simulated speeds of up to 600 mph. Rein in a turbine-driven chariot through 8 spectacular worlds. Negotiate through flaming methane lakes, Tusken Raider assaults, ant-gravity tunnels and much more in a pulse-punding, do-or-die fight to the finish where anyone will do anything to cross the finish line. How far will you go?

In addition to the above, Star Wars Racer Revenge is also getting a run of physical editions, but for the PS4. Fans will also be able to grab limited or standard copies of this one, just like the original above.

It has been eight years since SEBULBA, Galactic Podracing’s most notorious champion, met his downfall at the hands of a young ANAKIN SKYWALKER. Humiliated by his legendary Boonta Eve defeat, SEBULBA eventually disappeared from the Podracing circuit.

Meanwhile, Podracing’s underground allure has continued to spread. The vehicles are bigger and faster, and the pilots more aggressive.

Now at the opening of a new Galactic Podracing season, there is an unexpected challenger on the horizon. Emerging from seclusion with a dangerous new Podracer, a crew of sadistic henchman, and a murderous vendetta, SEBULBA at last has ANAKIN in his sights – and he is bent on revenge.

Hone your podracing skills in Star Wars™ Racer Revenge. This classic Star Wars game gets a Limited Run for the PlayStation 4 this Friday, October 18th at 10am & 6pm ET on limitedrungames.com! Priced at $29.99.

Jason's been knee deep in videogames since he was but a lad. Cutting his teeth on the pixely glory that was the Atari 2600, he's been hack'n'slashing and shoot'em'uping ever since. Mainly an FPS and action guy, Jason enjoys the occasional well crafted title from every genre.
@jason_tas
Previous Celebrate 40 years of Dark Phoenix with new variants
Next Mezco Addams Family “5 Points” figures coming