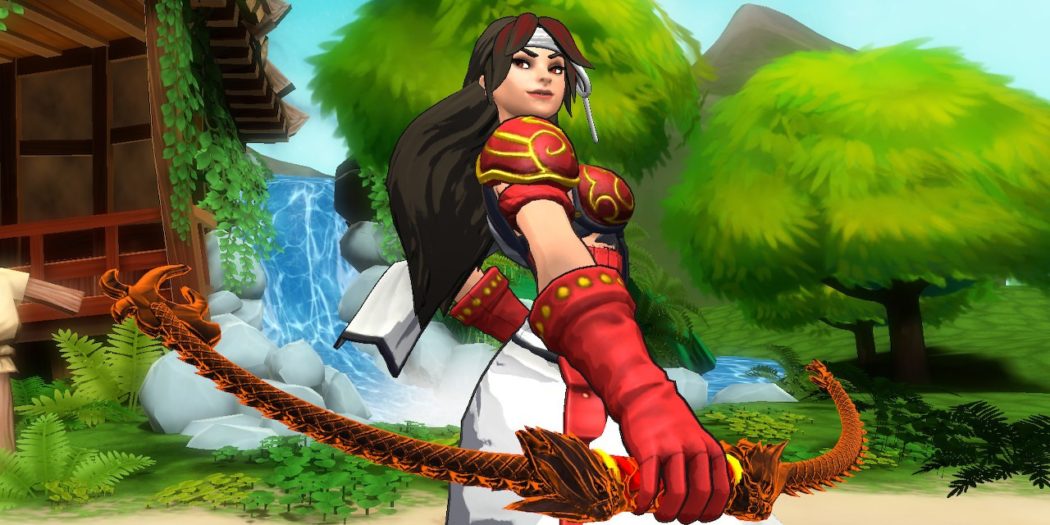 Fantasy Strike is an easy to learn fighting game that puts you right into the decision-making, punishing, spacing, and control of high-level play without the hours of regimented practice and passion it normally takes to get there.

There are still combo strings, but the highest damage count comes off of four straight attacks.

Fantasy Strike’s simplicity comes primarily from its controls. Standard attacks come from the Y button, and X and A are your two special variants. Pressing forward or back can change a move, as does using it in the air. Then there are grabs.

There are no quarter-circles, no backwards half circles and a forward, no Ivy’s Summon Suffering. Just simple, easy-to-learn, easy-to-use inputs.

There’s no crouching or low blocks, either, so you and your opponent have to stand man-to-man as you beat each other short of your yellow health bars.

Even those are simple to understand in Fantasy Strike. Each character has five to eight health, and each attack does one damage (except for supers and some bosses). At a glance, you can weigh the risk and reward of every move and know who will take more to beat down.

There’s nothing nebulous going on in Fantasy Strike. This makes it ideal for introducing it to friends, because in a couple of matches, everyone will have a reign on their character they wouldn’t get with a game like Street Fighter or BlazBlue.

There are ten total characters in Fantasy Strike, each differing wildly from each other. Even in the keep-away class, you have the likes of Jaina, who fires a mess of arrows and has a self-damaging, get-out-of-jail-free uppercut, and Geigar, a watchmaker who can’t use his projectile immediately after he’s held forward.

My personal favorites (of which you’ll want three, due to the way Ranked Matches are set-up) are definitely the afore-mentioned fire archer, Jaina; Argagarg, a poisoning, stalling fish-man whose extending arms provide an enormous hitbox; and Lum, a gambling Panda who pulls out random items to create victory through chaos.

There are also some slow-moving, screen-filling grapplers, low-health rush-down ninjas, and apparition-wielding lawyers, so you’re sure to find someone who fits your playstyle.

Of course, just because things are simple doesn’t mean there’s nothing to learn. Frame data, move interactions, match-ups and precise ranges still require you to put your head in the game. It just makes your head more important from the get-go. Ultimately: casual fighting game players have a way in.

Ease of understanding filters into the menus, too. One button sets your game to search for an online match (ranked or casual). You are then free to mess around in single-player bouts until you find an opponent. Press A. You’re in.

There’s enough single-player content in this wide release of Fantasy Strike to keep solo-players happy. The short six-battle arcade modes for each character are nothing special, though they do include some art and (cringey to entertaining) voice-acting that tease at greater lore (none of it particularly interesting). A daily survival challenge tests your abilities against other players. Beat enough straight AI opponents and you’ll fight a boss. Lose, and the game will tell you how you did.

You only get one try per day, though, so next up is the basic Survival mode, where you can face off against an array of fighters and try to make it to 20, 35, and beyond.

The best of the bunch, though, bar-none, is the brand-new (hitherto unreleased in the Steam Early Access version) Boss Rush mode. You’ll fight your way through eight super-powered characters, unlocking powerful buffs as you go. These range from a 50% walk-speed bonus, helping your keep-away game, to character-specific moves you can’t normally utilize. Jaina receives a diagonally-shot fire-arrow for anti-air, a flaming forward kick, and more. Argagarg can make his projectiles deal actual damage, and his poison last longer.

Each one of these abilities makes an immediate difference on play, strategy, and your chances to make it to the end of the group. It’s not easy going, as your enemies will be buffed up too, even summoning attacks from other fighters to support their pressure.

The game keeps track of your clear rate for the season, how far you’ve gotten with each character, and how many times you’ve done it.

Some of the bosses can feel a bit cheap and ridiculous (Bang Crackle Stomp Jaina comes to mind), but getting to them is such fun that it’s hard to be too upset. A mode where you could pick and choose from these bonuses to build super characters to face your friends would have been fun, but for now it’s relegated only to Boss Rush. In the end, piling up abilities is exhilarating, no matter what you’re up against.

I did run into a glitch where sometimes a boss rush wouldn’t start after you select your first skill, requiring a relaunch of the game to work properly during my playtime, but otherwise no problems with performance or technical elements.

As it is a fighting game, though, the single-player will only take you so far before you need to throw your skills in the ring. Whether you’ve got the local friend group to pester or distant pals, playing with friends is a cinch, whichever way you do it. Join a friend directly with just a couple button presses, and you’ll be throwing down like your lives depended on it in no time.

Casual play against randoms, meanwhile, has you bring in one character for a best of 5, making it ideal to practice with your favorites. But the real meat of Fantasy Strike’s online play is in its Ranked Mode.

I don’t typically partake in ranked modes for fighting games, but Fantasy Strike has a couple things working for it. First, you partake in mini-tournaments with every bout, working your way from quarters to semis to the grand finals. They’re short enough for quick sessions but satisfying in a way one-off matches wouldn’t be. Being crowned Grand Champion is thrilling, even if you’re only the Grand Champion out of eight players.

Second, players must bring in three separate characters to fight, and win with all three in order to progress to the next round. That means players must practice and ultimately excel with at least three different characters, instead of relying on just one. Their being simple to learn makes this a less daunting task, but you’ll want to make sure your Argagarg has practice against rush-downs, keep-away, and grapplers before you slot him on the team.

While we were able to play online during the duration of the review period (when every game ran perfectly smooth), at launch the console version will use the same servers as the Steam version. If the servers impact our score, we will update after launch.

Fantasy Strike is a supremely simple game to pick up. Case in point: I lost to a first-timer within a couple of hours, despite a week of play-time. The learning is easy, but the competition is fierce. Excellent online set-up makes for thrilling matches, and characters are interesting to play, if not necessarily interesting for their stories. Single-player fighting game fans will find some distance in Boss Rush, but Fantasy Strike will truly appeal to casual fighting game fans who want to feel like top-level competitors in just a few hours.

A roster of ten may be smaller than you’d like for the asking price, but that doesn’t make it difficult to recommend. Fantasy Strike is a fantastic fighting game.

For more on Fantasy Strike, check out the game’s Switch Listing, and if you’re interested in a similar style of fighting game, then check out our impressions of Pocket Rumble.

Don't waste time getting good: Fantasy Strike finds a sweet-spot between Divekick and Street Fighter, helping you to operate at great depth with ultimate simplicity.

Brutal Gamer's Nintendo Editor began his gaming life a little late- at five years old. But he's made up for it in the two decades since, gaming and writing about gaming with the same passion, fervor, and unrelenting love as his five-year old self.
Previous Batman: Red Rain returns in October’s Secrets of Sinister House
Next Pre-orders open for Arcade1Up’s Marvel Super Heroes cabinet