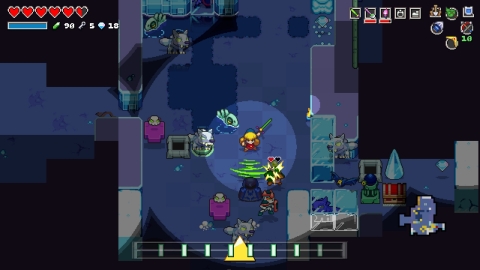 The Cadence of Hyrule lands on the Nintendo Switch this week, along with a few surprises like the Contra Collection and The Secret of Mana.

I don’t think I’m the target audience for Cadence of Hyrule, but even I have to admit it looks pretty cool. The game is a spinoff of sorts for Crypt of the Necrodancer, but starring Link, Zelda, and the Hyrule crew.

Coming off of E3, it’s a fairly large release for Nintendo, who had a few surprises this week as well. The collections of both Konami’s Contra and Secret of Mana surfaced, though neither is on the official rundown of what’s new here.

There is that trio of new NES titles for the Online virtual console though. All three are cool, though Double Dragon II is the clear headlining title.

Jason's been knee deep in videogames since he was but a lad. Cutting his teeth on the pixely glory that was the Atari 2600, he's been hack'n'slashing and shoot'em'uping ever since. Mainly an FPS and action guy, Jason enjoys the occasional well crafted title from every genre.
@jason_tas
Previous Silver Surfer: Black debuts in stores, gets trailer
Next E3 2019: Konami shocks with Turbografx 16 Mini