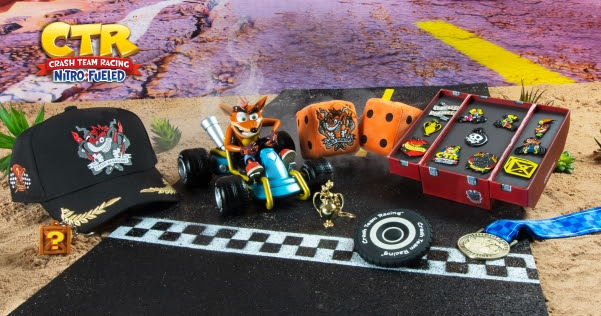 Very busy as of late is Numskull, who’ve been cranking out some quality stuff for some very big franchises. Crash Team Racing is the newest.

We recently took a look at 2 offerings from Numskull, in their Mortal Kombat line. The company regularly produces a mix of both typical and… atypical collectibles from major properties. For example, the MK series saw both a hat and a scented candle (among other items).

After Mortal Kombat, we saw what’s coming up as to the Xbox brand. The latest though, might be the coolest assortment of stuff yet. That, of course, would be Crash Team Racing.

The incoming kart racer from Activision is shaping up to be one of the best looking examples from the genre to date, and includes a ton of content that mines the depths of the Crash franchise.

Likewise, Numskull has a whole mess of stuff on the way. And once again, that will range from the standard, like hats and keychains, to the… different – like the CTR Incense Burner.

Staaaaaart your engines, because this is the king of all Crash Team Racing Nitro-Fueled merchandise – an official incense burner! Place an incense cone in the base, and watch as smoke bellows from the kart exhaust pipes in a mesmerising display of incense awesomeness.
Based on official art from Crash Team Racing Nitro-Fueled, this makes for an exceptional display piece for your cabinet, desk, or shelf, whether you choose to use it as an incense burner or not. It’s the ultimate Crash Team Racing collectible! Grab yours before it becomes a rare must-have.

As for the remainder of the line, here’s how it shakes out:

All of the above is set to see release along with Crash Team Racing itself, on June 21st. You can pre-order some for yourself here.

Jason's been knee deep in videogames since he was but a lad. Cutting his teeth on the pixely glory that was the Atari 2600, he's been hack'n'slashing and shoot'em'uping ever since. Mainly an FPS and action guy, Jason enjoys the occasional well crafted title from every genre.
@jason_tas
Previous Standalone expansion for Warhammer 40k Inquisitor announced
Next Blood: Fresh Supply oozes onto PC