Previews offers a ton of exclusives, and they just added another that pretty much every Pop! fan is going to want. It’s a creeptacular Batman Who Laughs.

Debuting earlier this year in the DC Comics crossover Metal, The Batman Who Laughs is a dark, purely evil version of the Dark Knight. He’s been infected by the Joker, murdered the Bat-family, and otherwise become a demonic shadow of his former self. There isn’t too much merch out there right now as to the character however, though DST is correcting that.

Locking up a Pop! vinyl figure from Funko for their Previews magazine, Diamond presumably has a winner here. After all, Funko’s rarer figures tend to be just a little bit hard to get. And one that features one of the biggest new villains in the DCU? I don’t think it’s going out on a limb to say that it’s going to be a solid seller. 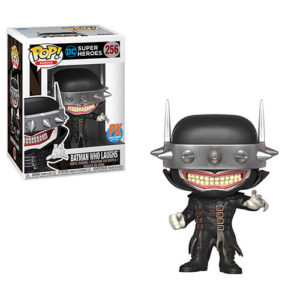 As with all the other standard sized Pop!s, The Batman Who Laughs is 4″ tall and has a movable head. There’s no other articulation, but that’s standard. Also as with other Pop!s, this bad boy will run you $11.99 USD. You’ll be able to grab one come this January, and you can pre-order it right now via your local comics shop.

Jason's been knee deep in videogames since he was but a lad. Cutting his teeth on the pixely glory that was the Atari 2600, he's been hack'n'slashing and shoot'em'uping ever since. Mainly an FPS and action guy, Jason enjoys the occasional well crafted title from every genre.
@jason_tas
Previous Spyro Reignited Trilogy shows off its upgraded visuals in new launch trailer
Next Intellivision returns in 2020 with the company’s brand new Amico