Have you managed to find the first round of DC Comics “100 Page Giant” issues at Walmart? Two more are hitting this week. 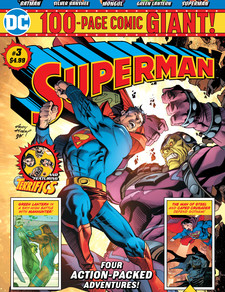 DC’s 100 Page Giant issues have been circulating for a while now, and they seem to be something of a hit. I’ve seen talk on social media that the books are only now becoming easy to find at stores, after being officially out for months. And that’s a good thing, since there’s a brand new round of them hitting right now.

The third issues of both the 100 Page Superman and 100 Page Justice League books are landing in the superstores. Both books will have the usual assortments of content, including fresh stories.

Superman Giant #3 will have a pretty important story contained within too, with part one of Batman writer Tom King’s “Up in the Sky”. And that’s part one of twelve, by the way. So this one’s a biggie. 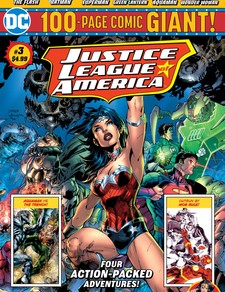 King, along with artist Andy Kubert, inker Sandra Hope, colorist Brad Anderson and letterer Clayton Cowles, has created a classic superhero story involving the kidnapping of an Earth child from Gotham City. Featuring DC mainstays Lois Lane and Perry White, in addition to cameo appearances from Batman and Green Lantern, this 12-part tale asks the question: How far across the galaxy will the Man of Steel go to bring a single child home?

Meanwhile, at the Hall of Justice…

Justice League Giant #3 will also feature a new tale, in the form of Amanda Conner & Jimmy Palmiotti’s Wonder Woman adventure “Come Back to Me.” Also in the mix on that one is Chad Hardin, Alex Sinclair, and Travis Lanham. So that’s a well stocked issue as well.

Want to try before you attempt to hunt down a few copies? You can read a few pages of the Superman book here, and the JL Giant here.

Jason's been knee deep in videogames since he was but a lad. Cutting his teeth on the pixely glory that was the Atari 2600, he's been hack'n'slashing and shoot'em'uping ever since. Mainly an FPS and action guy, Jason enjoys the occasional well crafted title from every genre.
@jason_tas
Previous One will fall this December in Marvel’s Infinity Wars: Fallen Guardian
Next Check out the first gameplay trailer for Achtung! Cthulhu Tactics