NECA might be the most consistently great booth at any con. This SDCC saw awesome stuff from Karate Kid, Ninja Turtles, and lots more.

Does NECA disappoint? Well I guess sometimes they do, but it’s rare. Usually, their action figures are meticulously sculpted, with tons of detail and nice articulation too. It’s a rarity to get all of that in one figure, but NECA comes through most of the time.

They’ve also managed to use that reputation to put together an impressive collection of licenses. It’s a stable that spans everything from Crash Bandicoot to the classic Teenage Mutant Ninja Turtles cartoon and arcade games.

This Comic Con saw some of both of those properties, as well as a glut of additional stuff.

Far and away one of NECAs most impressive lines, the Ninja Turtles stuff is usually Con-exclusive. The reason for that has to do with the license being Playmates Toys’ property, so anything made by another company (like NECA) is very limited in terms of sales.

Still, NECA keeps on making some of the very best Turtles stuff out there, even if it is nearly impossible to get ahold of. At the booth they showed off their Dimension X offerings once again, but the set was joined by classic “toon” Leatherhead. 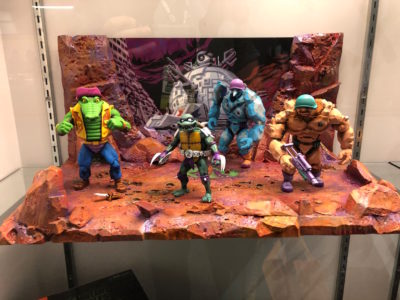 There’s no release date as of yet for these, and no word on just what Con they’ll be hitting. The money has to be on either October’s NYCC or next summer’s SDCC though, with SDCC being the favorite.

We’ve seen most of the Aliens and Predator figures that NECA had in the booth already. Still, it’s great to get another look at the Kenner-Influenced stuff, Aliens Drake, and those awesome AvP arcade game figures.

One thing that was wholly new though, was the figure for The Predator, the upcoming movie from Shane Black. The film revolves around an “ultimate” Predator, hunted by members of his own race. The figure shown at Comic Con was good looking, even though it’s in its prototype state. And it’s worth noting that the packaging was really sharp looking too.

As for the Terminator offerings, they were new, and were spectacular. We’re getting more Kenner goodness here, especially in the form of that cyber-arm T-800. That’s some wicked stuff and should look awesome next to the Kenner Aliens and Predator tribute figures.

Though the above lines were the hottest in the booth, there was also buzz surrounding more of what was on hand. Chiefly among that was the Karate Kid merchandise, which includes figures from the classic film. Personally I’m hoping that we also get figures based on the new YouTube show.

As you can see there, there’s also an Ace Ventura figure coming up. It’s made in the same style as the mixed media Karate Kid figures, and looks to include a couple of pets for Ace to detect. The figure has a decent likeness of Jim Carry too, which is a rarity. The actor hasn’t really been imitated in plastic too much, with no figures really hitting a proper depiction of his actual face. This one’s not too bad at all. 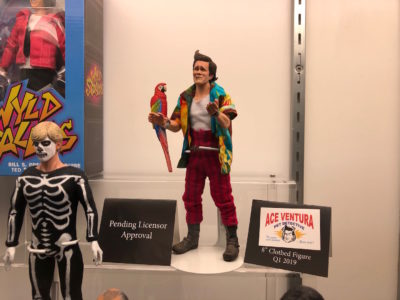 There was not however, an expansion to the Crash Bandicoot series of figures. What’s already been released or announced was on display, and looking good, but there’s no word or glimpse of additional characters. So if you’re waiting for a Dingodile, or Neo Cortex… keep waiting.

God of Wars’ Kratos was also present in the booth at Comic Con, along with Godzilla (two of ’em), Pan’s Labyrinth, and a giant-sized Foot Soldier from the classic TMNT movies. Good stuff.

Can’t forget about Wade, who was also on display. What’s so new about NECAs jumbo Deadpool figure? Well, this probably isn’t the “ultimate” Deadpool that you’re thinking of. This particular ‘Pool is massive.

No, like massive. As in, maybe the biggest “action figure” of all time. He’s officially “Half Scale”, which means he’s three feet tall. Who would want this in their home, I do not know, but he is kind of awesome his own way.

No word on pricing yet.

Jason's been knee deep in videogames since he was but a lad. Cutting his teeth on the pixely glory that was the Atari 2600, he's been hack'n'slashing and shoot'em'uping ever since. Mainly an FPS and action guy, Jason enjoys the occasional well crafted title from every genre.
@jason_tas
Previous DC launches digital tie-in comic series for Death of Superman movie
Next Relive the Justice League’s greatest moments with new book from Chartwell Books