The latest DC animated movie follows the Death of Superman event from the 90s. A digital comic series, launching today, is set to tie-in.

While there already was a Death of Superman animated movie a few years back, this one seems to be getting much more acclaim. And even though it is basically the same story, it’s presented in a totally different way. This new movie is a part of the DC animated universe of films that’ve been hitting home video for a while. As such, it seems as though there’s a much more accurate Doomsday tale told than in that previous volume.

If you’re somehow unaware, Doomsday is a monster – a genetically created alien that comes to Earth. His goal is pretty simple, and only really wants to destroy and kill the Man of Steel. There are reasons for that, though I don’t know if the movie plays into any of it.

What we know though, is that the Justice League can’t stop Doomsday, and it all comes down to Superman. A one on one battle that sees massive amounts of devastation in its wake. As for this tie-in comic series, it’s not an adaptation, but a kind of side-story. 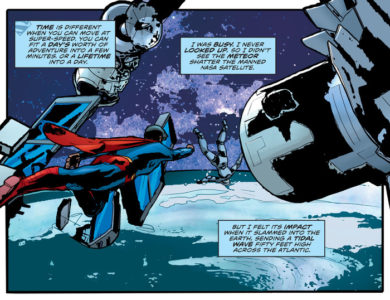 A day in the life

The book hits digital storefronts first, courtesy of all time great Louise Simonson and a cadre of artists. Included on the list are the likes of Cat Staggs, Joel Ojeda, Laura Braga and more. As I mentioned too, you won’t find Doomsday in here, instead it’s an exploration of the man himself, and what makes Superman Superman.

What is it like to be Superman—when the events of a day can be completed in a matter of minutes? This series begins as readers follow the hours that lead to the Man of Steel’s face-off with Doomsday—the alien that is destined to destroy him. He’ll save an astronaut when a meteor crashes into their shuttle, he’ll save Major Lane when his experiment-gone-wrong Metallo comes for revenge, plus he’ll save time for a visit when Ma and Pa come to Metropolis to meet his new lady, Lois—and that’s just the beginning. The series contains additional chapters following the path of the Daily Planet’s Jimmy Olsen in those fateful hours, plus the aftermath of the loss of a true hero.

Planned for 12 parts, the series debuts today. You can grab a copy via the DC Comics App, readdc.com, iBooks, comiXology.com, Google Play, Kindle Store or Nook Store. Installments will be hitting weekly for the next 12 weeks, presumably leading into an eventual physical edition.

Jason's been knee deep in videogames since he was but a lad. Cutting his teeth on the pixely glory that was the Atari 2600, he's been hack'n'slashing and shoot'em'uping ever since. Mainly an FPS and action guy, Jason enjoys the occasional well crafted title from every genre.
@jason_tas
Previous SDCC 2018: Stranger Things, Cuphead, and more at McFarlane
Next SDCC 2018: Check out TMNT, Karate Kid, Godzilla, Terminator and lots more from NECA