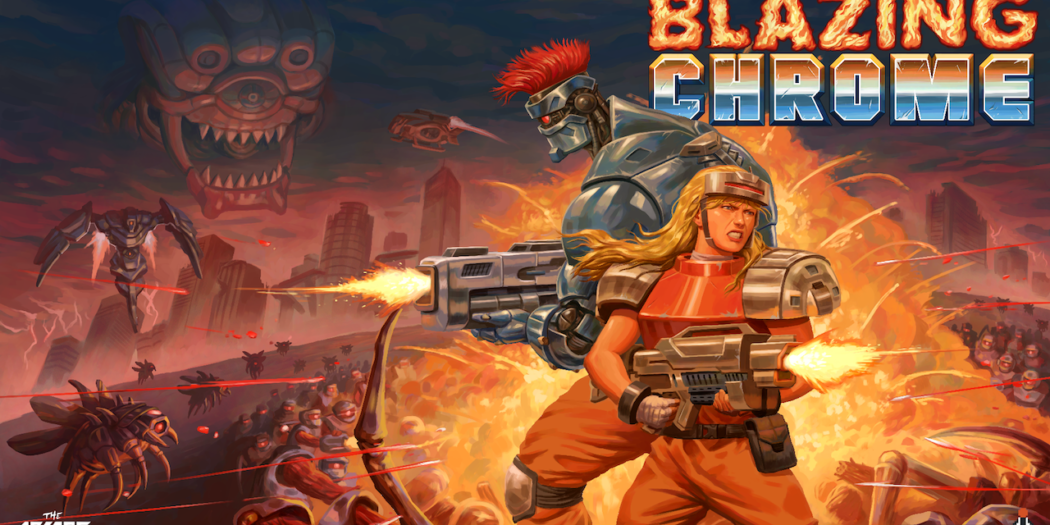 Remember the likes of Contra and Metal Slug? Developer Joymasher does, and their latest game Blazing Chrome pays copious homage.

In Blazing Chrome, an oppressive regime of computers rule the Earth while humans are expendable, lacking power, prestige or status among their machine overlords. When a small group of rebels decide to overthrow their oppressors, it results in heavy casualties and a ton of lock-and-load fast-paced action where scrapping robots and blazing chrome with your powerful weapons is the only thing standing between you and your freedom. Heroes can choose to play as Mavra, a super badass human resistance soldier, or Doyle, the equally groovy and deadly insurgent robot. Either choice will lead you down a path of resistance, culminating in a hellfire of bullets and a revolution that will decide the fate of humanity.

That’s the second level of the game in play, in that trailer. In it, you saw playable characters Mavra and Doyle assault the flying Thunderbird and those bikers – the Reapers. The whole thing is delightfully old school, and definitely does have a heavy Contra III flavor to it. That has to have fans smiling.

After all, the formerly-glorious franchise has been all but forgotten by its publisher. I think it’s safe to say that we’re unlikely to see any official entries soon. So to say it’s good to see that kind of action on a screen again… well it definitely is.

It could be a while before you get to actually play this one though. There’s no release date as of yet, though we do know it’ll be landing on PC.

Jason's been knee deep in videogames since he was but a lad. Cutting his teeth on the pixely glory that was the Atari 2600, he's been hack'n'slashing and shoot'em'uping ever since. Mainly an FPS and action guy, Jason enjoys the occasional well crafted title from every genre.
@jason_tas
Previous Nintendo Download: Wolfenstein II Comes to Nintendo Switch!
Next July Games With Gold: Assault Android Cactus, Death Squared, Virtua Fighter 5, Splinter Cell