Who is James Bond? We don’t really know, even after a few dozen movies. But a new mini-series from Dynamite is set to answer that question.

Bond, as he is now, isn’t the original character that was created by Ian Flemming. For that matter he’s not the guy portrayed by Sean Connery either. For one thing, and this might be the biggest revision, he’s now modern. Daniel Craig’s version of Bond is living now in the 21st century, battling terrorists and the like. He’s not as gadgety as earlier versions, and doesn’t really battle comic book-level super villains either.

The original was set in a much earlier time, and that’s the one that Dynamite is telling the origin of. 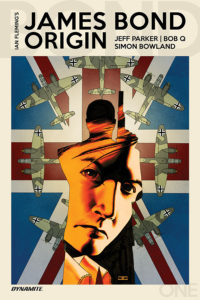 Hitting stands in September, James Bond Origin takes readers back to March 1941. Seventeen-year-old James Bond is a restless student in Scotland, an orphan, eager to strike out and make his mark on the world. But a visit by an old family friend coincides with The Clydebank Blitz, the most devastating German attack on Scotland during the War! James will fight through hell to survive, coming out the other side determined to make a difference.

“It’s a weighty challenge to reverse-engineer this icon into a young man on a life’s journey of danger, but Nate Cosby paired me up with Bob Q, who not only brings the gravitas of war in 1941 Europe but nails the promising hero in his youth,” stated writer Jeff Parker.  “James doesn’t have the vast experience of a double-O agent yet, but he’s tenacious and a lightning-quick study. Bob and I work to show the full force of Bond’s spirit.”

This is a big series for Dynamite, as you can probably imagine. The company has been making Bond books since 2014, but this one might be the most important. Bond’s origin has never really been told after all, only hinted at. This new book digs in whole-heartedly.

As you could have guessed too, there will be a bunch of variant covers to support the release. Expect to see work from John Cassaday, David Mack, Kev Walker, Gene Ha, Ibrahim Moustafa, and Bob Q. & Jordan Boyd all lend a hand.

Together with the script from Jeff Parker, James Bond Origin lands on the racks and pretty much all digital storefronts this coming September.

Jason's been knee deep in videogames since he was but a lad. Cutting his teeth on the pixely glory that was the Atari 2600, he's been hack'n'slashing and shoot'em'uping ever since. Mainly an FPS and action guy, Jason enjoys the occasional well crafted title from every genre.
@jason_tas
Previous Nakatomi Corp online gift shop opens to commemorate Die Hard’s 30th
Next Fox officially accepts Disney bid for entertainment assets