Heroes in Crisis is going to offer the DC U’s biggest heroes in a new light with Sanctuary. Writer Tom King and artist Clay Mann are going to take them there.

Imagine being a superhero. Yes, there’d be some awesome moments to be had, and some incredible adventures too, no doubt. But what happens to one of these larger than life people when they come back to Earth (sometimes literally)? Would battling super villains and otherworldly horrors take a toll, mentally? 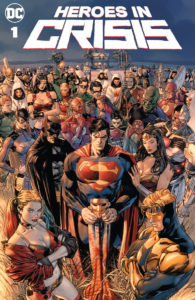 It probably would, and that’s where King and Mann are taking Sanctuary. A place where heroes can decompress, Sanctuary itself is pretty cool. The place marries Kryptonian tech to Amazonian magics, and is funded by Wayne Enterprises. It allows heroes to kind of have a second of peace. Though it’s not perfect, and that’s the focus of the story. What happens when your sanctuary is corrupted?

King himself is keenly prepared for this story, which is set against a murder mystery. The writer was a CIA counterterrorism agent for years before transitioning to the civilian life. So, to put it mildly, he knows about the stresses of war.

“I feel like I’m part of a rolling generation of people who spent their twenties overseas fighting terrorism,” explained King. “Millions of people cycle through that machine and come home to America. And I think that sort of experience of violence is shaping who we are as a culture, and as a country. And I want to talk about that. I want to talk about that experience, the experience of what violence can do to a person, to a community, to a nation, to a world.”

Heroes in Crisis #1 hits this coming September and will run for a total of 7 issues.

Jason's been knee deep in videogames since he was but a lad. Cutting his teeth on the pixely glory that was the Atari 2600, he's been hack'n'slashing and shoot'em'uping ever since. Mainly an FPS and action guy, Jason enjoys the occasional well crafted title from every genre.
@jason_tas
Previous Episode 40: E3 Extravaganza!
Next Conan Omnibus brings back classic comic book barbarian action