The hunt for Wolverine ends with August’s Dead Ends #1

With crossover series’ and one shots out there, the Hunt for Wolverine is in full swing in Marvel’s universe. But not to worry, it will come to a conclusion eventually, and that starts with Dead Ends #1 this August.

The hunt is over 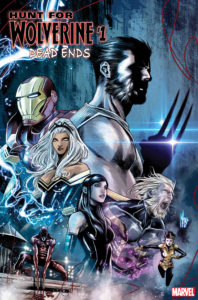 “The four Hunt For Wolverine miniseries all follow different threads in pursuit of our pointy-fisted friend, and each comes to a conclusion with different pieces of the puzzle,” teases editor Jordan D. White. “With DEAD ENDS, the players assemble to bring those puzzle together and see what they learned… but they might not like what they find.”

Interesting commentary. And this is staring to sound a little weird. Well, weirder than usual. After all, we’ve already seen Logan in a few comics since his return. What could those searching for him “not like”?

However the claw slices though, this issue should be a packed one. The one shot Dead Ends will include quite a bit of content, characters, and story arcs. All of the various characters from the different Hunt miniseries’ will be in the book, and presumably all the loose ends will be tied. Hopefully anyway.

Whatever happens in the issue, let’s hope it actually ends with Wolverine actually back in action. And maybe the small army of fakers at least whittled down a bit. Though that might be too much to hope for.

Hunt for Wolverine: Dead Ends #1 lands on the racks this August the 29th.

Jason's been knee deep in videogames since he was but a lad. Cutting his teeth on the pixely glory that was the Atari 2600, he's been hack'n'slashing and shoot'em'uping ever since. Mainly an FPS and action guy, Jason enjoys the occasional well crafted title from every genre.
@jason_tas
Previous More Fantastic Four covers announced, this time as first issue variants
Next Bloodshot Salvation #12 (Comics) Preview