It’s Alien Day, and that usually means a slate of xenomorphic announcements. Of course, Dark Horse Comics is getting down on that, since they’ve been the Aliens publisher for decades. And this year, that means a massive collected edition, called Aliens Essential Comics Volume 1.

It’s the most wonderful time of the year

Happy Alien Day everyone! Yes, it’s another non-holiday to celebrate a pop culture happening, but as they go, Alien Day is pretty neat. That’s mainly because it celebrates Aliens, one of the most 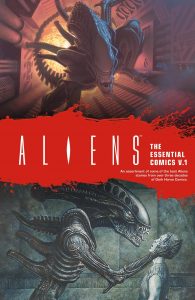 iconic sci-fi/horror properties of all time. And also the whole gimmick is cool, with it being April 26th – 426. For the un-indoctrinated, that’s a reference to the planet that Aliens takes place on, LV-426.

Enough of that though, because Dark Horse Comics’ announcement is actually pretty cool. That being that they’re prepping a new queen-sized collection of their best, classic Alien stuff. And I mean “classic”, ’cause the Aliens Essential Comics Volume 1 goes way back.

Aliens Essential Comics Volume 1 collects the first Dark Horse Comics Aliens trilogy – Outbreak, Nightmare Asylum, and Earth War, which follows Hicks and Newt—and eventually Ripley—as they join forces to battle an infestation of Aliens. Written by Mark Verheiden (The Mask, Timecop, Battlestar Galactica, Daredevil), and beautifully illustrated by Mark A. Nelson, Den Beauvais, and Sam Kieth, these are the essential Aliens comics that have stood the test of time . . . and kept readers awake at night!

While it’s been announced today, the launch for Aliens Essential Comics Volume 1 is equally timely. It’ll be in stores just in time for some Halloween frights, landing on shelves on October the 24th. Weighing in at a massive 368 pages, this bad boy will run you a ridiculously low $24.99 USD.

You can pre-order a copy at Amazon, Barnes & Noble, or your local comic shop.

Jason's been knee deep in videogames since he was but a lad. Cutting his teeth on the pixely glory that was the Atari 2600, he's been hack'n'slashing and shoot'em'uping ever since. Mainly an FPS and action guy, Jason enjoys the occasional well crafted title from every genre.
@jason_tas
Previous Dark Souls: Remastered digital pre-orders open for Xbox One and PS4
Next One:12 Collective Spider-Man (Action Figure) Review