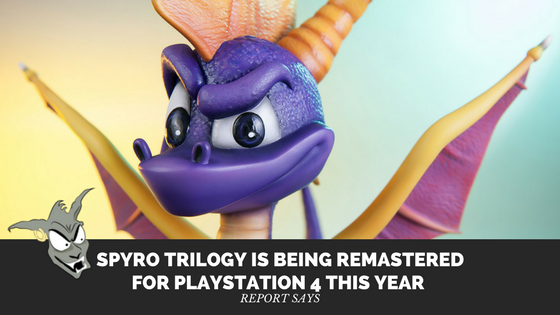 The Spyro trilogy was reported to be announced as a remastered game, much like Crash Bandicoot N. Sane Trilogy, this year in March.

This is an excellent report because Spyro has been under the radar for quite some time due to its inclusion in the Skylanders games and many remastered releases of other classic videogames but never forgotten.

According to unnamed sources that tell Kotaku UK, the new remastered Spyro will feature new assets, lighting, animations, cinematics, as well as a remastered soundtrack.

It is also said to feature updates to the save functions, but other than original Crash having a password save system, Spyro never had this problem.

The remaster will include (as they were released) Spyro the Dragon, Spyro: Ripto’s Rage!, and Spyro: Year of the Dragon, which was my personal favorite. There was also a hint that it might include content cut from the original games.

The unnamed sources also mention that the Spyro the Dragon Trilogy Remastered is currently under development by Vicarious Vision who also developed the Crash Bandicoot N. Sane Trilogy. Vicarious Vision is now known for their Skylander games, but as a fun fact, they even produced Crash Bandicoot Purple: Ripto’s Rampage and Spyro Orange: The Cortex Conspiracy for the GameBoy Advance in 2004.

The remastered Spyro the Dragon Trilogy will be announced for PS4, with PS4 Pro support, sometime in March 2018. One source suggested that September would be the launch month, which would be in line with Spyro the Dragon’s 20th anniversary.

While this detail will not be part of the announcement in March, the game will be a one-year timed exclusive for PS4 as the reports state, before being ported to other systems in 2019. Simler to the reports on the Crash Bandicoot N. Sane Trilogy. While never confirmed expect to see Crash on PC and multiple systems sometime this year.

Dylan is a writer, gamer, avid movie lover, and PlayStation extraordinaire. Currently, he attends Radford University in pursuit of a BS in Media Studies with a concentration in Journalism. When he’s not writing the next epic post (but you know he is), he plays games like Destiny, Uncharted, Wolfenstein/DOOM/Dishonored; long story short: If I played the game, I liked it; if I haven't played it, just remember that I'm in college.
@Dylanslegos
Previous Venom gets the variant cover treatment for 30th anniversary
Next Nintendo Download: The Witch is Back … and Now on the Go!