IDW’s Transformers vs GI Joe getting a deluxe edition

It was Transformers vs GI Joe like it’d never before been seen, and now IDW’s off the wall crossover mini-series is getting a collected edition. 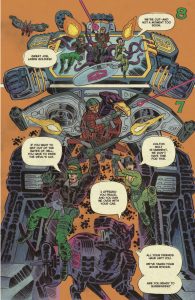 I must admit that, even though I’m a fan of both properties, I’ve never read this book. And that was really some feat too, considering the fact that this mini was almost universally praised.

From writer Tom Scioli and artist John Barber, the series pitted the toy juggernauts against each other. But unlike past efforts at the same thing, or the Hasbroverse pairings, this book stood on it’s own. It was a whole different animal, and not constrained by a comics “universe” and the rules that come with something like that. As I understand it, it was also as nutty as you could get. But in a good way, you know? 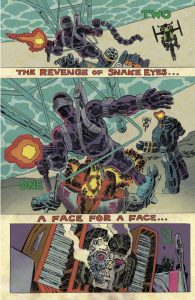 In any event, all 13 issues of the comic are included in this volume – The Quintessential Edition. You even get the ‘0’ issue that was released as a part of Free Comic Book Day in 2015 and the Transformers vs. G.I. Joe The Movie Adaptation. IDW calls that one “bonkers”, so you know it’s probably worth your time.

If that’s not enough for you, then you’ll be happy to know that there’s a cover compilation here too, and commentary. Full commentary on each and every page is included from Scioli and Barber, so you get to read the thoughts that went into each event. Quintessential indeed.

Transformers vs. G.I. Joe: The Quintessential Collection is available right now and will run you a suggested $49.99 USD.

Jason's been knee deep in videogames since he was but a lad. Cutting his teeth on the pixely glory that was the Atari 2600, he's been hack'n'slashing and shoot'em'uping ever since. Mainly an FPS and action guy, Jason enjoys the occasional well crafted title from every genre.
@jason_tas
Previous The animated Super Mario movie is officially coming to theaters
Next Brutal Gamer Awards: Playstation 4 Game of the Year 2017