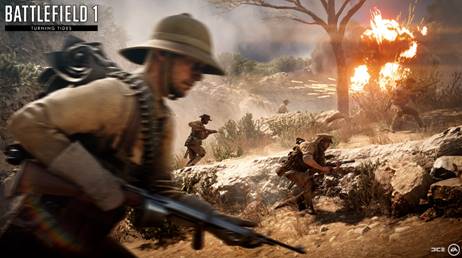 Home / News / On December 11th, tides will turn in Battlefield 1 with the latest dlc pack

On December 11th, tides will turn in Battlefield 1 with the latest dlc pack

Battlefield 1’s Great War is still raging a year after release on consoles and the PC. With new weapons, maps, and a fresh class, Turning Tides is almost here.

Yes, it’s been out for a while, but wow do I keep forgetting how great Battlefield 1 looks. Those visuals, even now, are stunners. And all-new by the way, as Turning Tides is set to deliver a bunch of new goodies for B1 multiplayer gamers. The 1915 British amphibious assault of Gallipoli is the centerpiece in this new pack, and will hit in two waves. That’s right, Turning Tides is a two-parter.

The first assault will carry the “new Infiltrator Elite Class, six weapons and two melee weapons added to your arsenal, and you’ll get to rule the waves with the L-Class Destroyer.” And the second? That will plop players into the “North Sea to tackle two other unique maps: Zeebrugge and Heligoland Blight, with the chance to charge into battle with the new Royal Marines and spawn on the C-Class Airship.”

All in all, that’s pretty meaty. As you might imagine though, that December 11th date is the one for Premium members. If you’re not a Battlefield 1 subscriber, then you’ll be waiting a bit longer to play. Just when that might be, we’re not sure yet, but we’ll keep you up to date.

EA also delivered an update on other content coming to the game, which you can find below.

Jason's been knee deep in videogames since he was but a lad. Cutting his teeth on the pixely glory that was the Atari 2600, he's been hack'n'slashing and shoot'em'uping ever since. Mainly an FPS and action guy, Jason enjoys the occasional well crafted title from every genre.
@jason_tas
Previous Star Trek: Waypoint volume one is ready to beam into fans libraries
Next Bungie Releases a Free Trail for Destiny 2