Home / Comics / Brace yourselves, Weapon H is getting his own series from Marvel

Brace yourselves, Weapon H is getting his own series from Marvel

While he’s not Totally Awesome, the latest Hulk to wander through the Marvel U might be the strangest one yet. Ready for a Weapon H ongoing?

How much have you been paying attention to the Marvel U’s Hulk family? If the answer is ‘not much’ then you might be wondering what Weapon H is. Yes, it sounds like more of an X-Men thing than a Hulk thing, but it’s actually both.

How’s that? Weapon H is spun out of a crossover that included both the mutants of Weapon X and Totally Awesome Hulk. It also falls a tad on the ridiculous side, but you can see that for yourself. 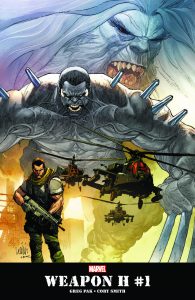 The Weapon X program has done it, at the cost of their own destruction: they’ve completed their biggest and most dangerous experiment yet, a hybrid of Hulk and Wolverine DNA known as WEAPON H. Now, he’s ready to take on the world – and he means business.

“Greg Pak wrote one of the biggest and most action packed Hulk stories ever in Planet Hulk…so it only made sense that he brought those same sensibilities to Weapon H,” said series editor Darren Shan. “We’re going to pit him against the biggest threats of the Marvel Universe that you can imagine, starting with a new kind of Wendigo! And then Cory Smith is going to multiply that times ten and smash the hell out of it with his incredible art! Whether you read his first appearance in Weapon X: The Hunt for Weapon H or not, you’re going to find that we only scratched the surface of this bombastic new character!”

Jason's been knee deep in videogames since he was but a lad. Cutting his teeth on the pixely glory that was the Atari 2600, he's been hack'n'slashing and shoot'em'uping ever since. Mainly an FPS and action guy, Jason enjoys the occasional well crafted title from every genre.
@jason_tas
Previous One:12 Ragnarok Thor and Hulk, Deluxe Joker go up for pre-order
Next Ninja-K #2 (Comics) Preview